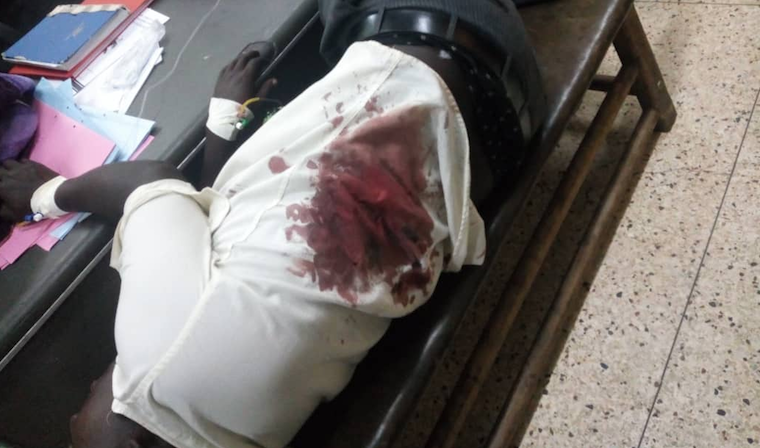 Police have shot dead one person and injured another at Karanorya in Mbarara city, western Uganda for allegedly failing to stop at a weighbridge.

The deceased has been identified as Ivan Saturday Bimanyirwoha from Rukungiri district while the injured is Simon Katuramu, an aspirant for the Western Youth parliamentary seat and lecturer a Metropolitan University in Kampala.

Samson Kasasira, the Rwizi region police spokesman, says the duo was travelling in a Fuso lorry registration number, UBF 109D that was transporting iron sheets to Rukungiri from Kampala on Tuesday when they were shot.

According to Kasasira, the counter-terrorism officers attached to the Uganda National Roads Authority (UNRA) opened fire to stop the duo that was travelling with another person on the truck after they refused to stop at the weighbridge. Kusasira says the officers first shot at the lorry tyres and in the air but one of the bullets hit Katuramu in the stomach while another caught Bimanyirwoha on the head.

Andrew Mugume, the Kacence West Cell LC I vice-chairperson, says they heard a volley of bullets as police pursued the truck.

“We heard the bullets at around 8:00 am. The police officers were shooting rapidly in the air and at the Fuso as it was heading towards Mbarara town. All of a sudden we saw the lorry stop a few meters from the weighbridge on the bypass, two people jumped out and took off. The other came out crawling,” Mugume said.

He explains that one of the occupants crawled out and was taken to Mbarara hospital after being hit in the chest. Mugume says police later discovered that one person had died and remained inside the truck. According to Kasasira, two people believed to have been on the truck are still missing.

“A team of detectives and the flying squad has been dispatched to Mbarara weighbridge station to arrest the counter-terrorism officers and UNRA staff who were involved,” he said.

Benon Kyabwisho, the interim mayor Mbarara North Divison North, says the weighbridge officers are never on the road and only show up when they see a truck passing.

“You see the offices are not on the roadside, you have to first turn from the road up a small hill. The officers are always seated in their offices so when they see a truck pass without going there they start chasing it,” he said.

All Vision Group staff to be tested for coronavirus