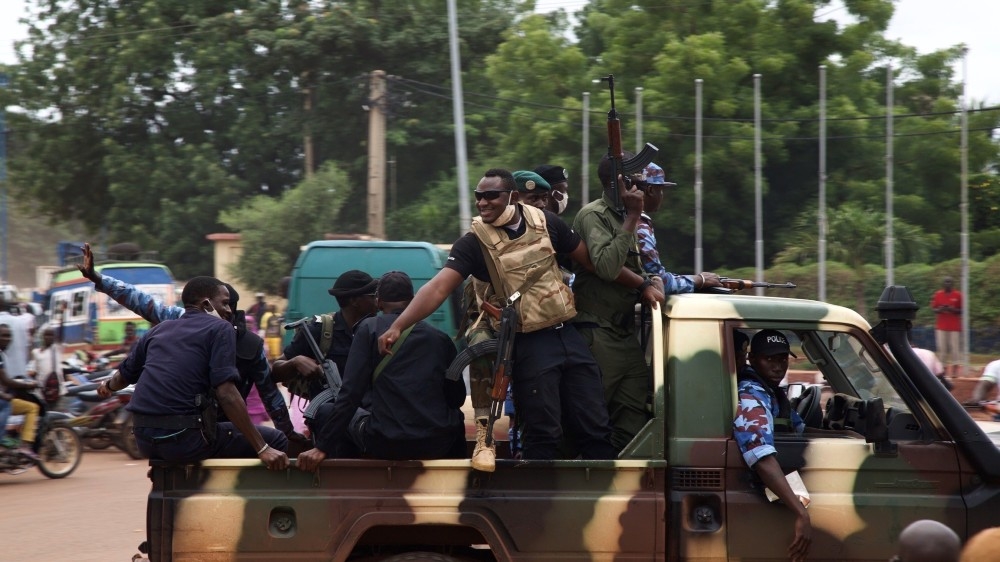 Military officers have taken charge in Mali after detaining President Ibrahim Boubacar Keita at gunpoint and forcing him to resign, in a coup d’etat that drew immediate international condemnation.

The 75-year-old Keita had been the target of weeks of mass protests demanding his resignation over what opponents said were his failure to restore security, address corruption and lift living standards.

The organisers of the coup have pledged to restore stability and oversee a transition to elections within a “reasonable” period.

Below is a roundup of regional and global reaction to the events in Mali:

Cyril Ramaphosa, the chairman of the African Union (AU) and president of South Africa, condemned the “unconstitutional change of government” in Mali and demanded the release of Keita and other top government officials.

The AU also said on Wednesday that it was suspending Mali’s membership until constitutional order is restored.

His Excellency President @CyrilRamaphosa condemns the unconstitutional change of government in Mali. President Ramaphosa demands that the Malian military release from detention the President, the Prime Minister, Ministers and other Government executives.

In a statement, the Economic Community of West African States (ECOWAS) expressed “great concern” over the “seizure of power by Malian military putschists”.

The 15-nation bloc, which had tried to mediate in the political crisis between Keita and the opposition, said its members would close land and air borders to Mali and demand sanctions against “all the putschists and their partners and collaborators”.

The 15-nation bloc also said that it would suspend the country from its internal decision-making bodies.

United Nations chief Antonio Guterres on Tuesday demanded “the immediate and unconditional release” of Mali’s president and members of his government.

“The secretary-general strongly condemns these actions and calls for the immediate restoration of constitutional order and rule of law in Mali,” a spokesman for Guterres said in a statement

“To this end, he demands the immediate and unconditional release of President Ibrahim Boubacar Keita and members of his cabinet,” added the spokesman, Stephane Dujarric.

European Union: ‘Return to the state of law’

European Union leaders also called for the “immediate freeing” of the detained politicians and “for a return to the state of law”.

“We believe that the stability of the region and of Mali, and the fight against terrorism should be an absolute priority,” EU Council President Charles Michel said after a video summit of the bloc’s 27 leaders on Wednesday.

The government of South Africa called for an “immediate return to civilian rule”.

In a statement on Wednesday, Ramaphosa also urged the people in Mali to “observe the rule of law and engage in peaceful dialogue to resolve their differences”.

President Ramaphosa calls for an immediate return to civilian rule & for the military to return to their barracks.

The President urged the people of Mali, political parties & civil society, to observe the rule of law & engage in peaceful dialogue to resolve their challenges.

Nigeria’s Minister of Foreign Affairs Geoffrey Onyeama condemned the military coup and called for the “immediate and unconditional restoration of constitutional order”.

In a statement on Wednesday, he also welcomed the activation of the ECOWAS standby force.

The Nigerian Government unequivocally condemns the coup d’état that took place in #Mali yesterday and demands the immediate and unconditional restoration of constitutional order. We welcome the urgent activation of the #ECOWAS Standby force. @NigeriaGov @ecowas_cedeao

Angola: ‘We repudiate this way of forcing the alternation of power’

In a post on Twitter on Wednesday, he said his government had carefully monitored the latest events, and despite the reasons “on which the president was ousted”, his government “repudiate[d] and discourage[d]” this way of forcing a change in power.

Translation: “We carefully monitored the latest events in Mali. Regardless of the reasons on which the President-elect was ousted, we repudiate and discourage this way of forcing the alternation of power.”

Algeria: ‘Rejection of any anti-constitutional change’

Algeria also rejected the coup in its neighbouring country and called for elections in line with its constitution.

“Algeria reiterates its firm rejection of any anti-constitutional change of government,” the foreign ministry said in a statement,

It said Algeria was following with “concern” developments in Mali, with which it shares an almost 1,400km-long (870-mile) border.

Algiers called on “all parties to respect constitutional order and to return to reason for a rapid end to the crisis”, the ministry said. “Only polls constitute the path to power and legitimacy,” it added.

United States Secretary of State Mike Pompeo condemned the “mutiny” and called on all political and military actors to work towards the restoration of a constitutional government.

“We urge all stakeholders in Mali to engage in peaceful dialogue, to respect  Malians’ rights to freedom of expression and peaceful assembly, and to reject violence,” Pompeo said in a statement.

The U.S. strongly condemns the August 18 mutiny in Mali. We join our international partners including the Economic Community of West African States and the @_AfricanUnion in denouncing these actions.

The government of China called for a peaceful solution to the crisis in Mali.

Foreign Ministry spokesman Zhao Lijian, speaking at a regular press briefing, said Beijing was paying close attention to the situation and opposed the change of power through means such as the use of force.

He added that China supported the efforts of relevant regional and international organisations, especially the AU and ECOWAS, in finding a peaceful solution to the crisis in Mali.

In Turkey, the governing AK Party’s deputy chairman for foreign affairs called for the “immediate release” of Keita and other senior officials.

Cevdet Yilmaz on Wednesday expressed Ankara’s deep concern and said it hoped for people’s “unity, stability and a speedy return to a normal democratic political order”.

German Chancellor Angela Merkel “condemned the military putsch” and said she wished to promote “stability in Mali and peaceful relations”.

She also said German soldiers stationed in Mali were not in any danger, while the foreign office added that “it was closely monitoring the situation and had closed the embassy as a precaution”.

Dozens of migrants die in shipwreck off Libya – UN