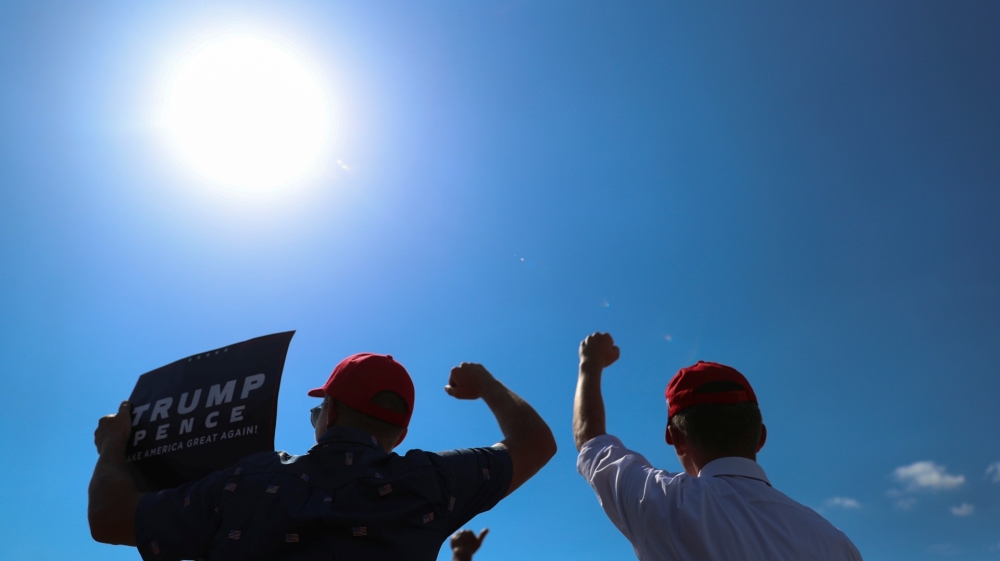 For Nancy Shively, a teacher, life-long conservative, and 2016 Trump voter from state of Oklahoma, the last straw was the United States president’s response to the coronavirus.

Despite casting her ballot for a Republican presidential candidate every election since she first voted in 1976, Shively, 63, has resolved to support Democratic candidate Joe Biden in the 2020 election.

Organisers of a coordinated effort to appeal to disillusioned conservatives, lead by members and former members of the Republican Party, hope voters like Nancy will help to make the difference in the upcoming 2020 US presidential election. The Republican Party has long appealed to conservative voters and is one of two major parties – along with the liberal Democratic Party – that overwhelmingly dominate US politics.

In 2016, a similar effort led by so-called “Never Trump” Republicans, who saw Trump as an existential threat to the country, fell short of ending his presidential bid.

“I knew Trump was a jerk and he was a misogynist, but like a lot of people that voted for him, I was hopeful that he would have people around him that would curb his impulses … but I really did not know the full extent of his pathology until the pandemic,” said Shively, a mother of four and grandmother of six.

“I’m pro-life. It’s probably why I stayed in the Republican Party as long as I did,” she added. “But pro-life means all life, not just unborn children, and watching the way Trump has just mishandled the pandemic, and the deaths that have resulted, I care about those lives too.”

Nancy Shively, who has voted for a Republican in every United States presidential election cycle since 1976, plans to vote for Joe Biden [Al Jazeera]

Organisers of this election cycle’s conservative resistance against Trump hope to learn from 2016, when the coordinated effort largely fizzled after the primary, replaced by a handful of disparate Republican Party members and officials who vowed not to support the then-candidate.

“This time there is a real organised campaign to stop him in the general election,” said Tim Miller, who has worked on Republican presidential campaigns and as the communications director for Our Principles PAC, one of two prominent conservative political action committees (PACs) that sought to end Trump’s 2016 White House bid.

“[In 2016] we had an organised campaign to stop him in the primary, but it was kind of too late and there was no real campaign within the party against him in the general election,” he said.

Miller is currently the political director of Republican Voters Against Trump (RVAT), a group that has taken a distinct approach to reaching disillusioned Trump voters by using first-person accounts from other rank-and-file conservatives who have decided to vote against the president.

In more than 500 selfie videos collected by the group, including one uploaded by Shively, those voters tell their stories in hopes of building a “social support network” for Republicans who feel Trump has diverged from the ideals they feel American conservatism represents, Miller said. The videos are being used on social media and in a $10m ad campaign running –  or soon to run – in battleground states North Carolina, Arizona, Pennsylvania, and Ohio.

This is a must watch, an eloquent take on Trump from a Georgia Republican.

“I believe God put him up in for a reason, to show us what our government is lacking and what we are losing. This man has broke us down to the very marrow and exposed our weaknesses.” pic.twitter.com/cWD2BBnSgs

Elaine Kamarck, a senior fellow in the Governance Studies programme at the Brookings Institution, described the 2020 conservative strategy against Trump as “much more effective than it was four years ago” – especially when it comes to appealing to traditionally Republican demographics that have shown the most aversion to Trump, like suburban women.

“The ‘Never Trumpers’, which were always the Republican establishment, are much more sophisticated this time around than they were last time,” she told Al Jazeera. “They are communicating to Trump voters and to Republican voters by not appealing to elites, but by using the voters’ own voices”.

Still, asking a life-long Republican to potentially support a Democrat is an exceptional request in a deeply-partisan country where political affiliation is often intertwined with identity, said Kristopher Purcell, co-chair of 43 Alumni for Biden, a group of over 200 former George W Bush campaign and administration personnel who are explicitly supporting Biden and his vice-presidential running mate Senator Kamala Harris and are targeting suburban voters in swing states.

“People grow up in parties much like they grow up in a religion or grow up in a certain state, and they feel attached to that,” Purcell said. “For many people it’s a difficult bridge to cross”.

“Part of what we’re doing is saying that it’s okay to [vote for Biden],” he added. “We’re an organisation who served a conservative Republican president, but we’re willing to go across the aisle and vote for the Democratic nominee because it is absolutely 100 percent in the best interest of the country”.

‘Keep him on his back foot’

Taking a more antagonist approach in this election cycle’s conservative resistance is the Lincoln Project, a super PAC that has raised over $19m and attracted wealthy ‘Never Trump’ industry titans.

Their provocative ads are meant to specifically target Trump’s psyche, playing on his fast-finger Twitter posts to influence the news the president generates.

That way, the president uses his time responding to Lincoln Project ads and not attacking Biden, said Reed Galen, who is a cofounder of the group and who worked under Senator John McCain and former President George W Bush before leaving the party.

The group’s ad campaigns have questioned Trump’s health, suggested his staff constantly talk behind his back, and placed the president’s statements alongside a laugh track.

“What I think we’ve been able to do is keep him on his back foot. And so that he’s constantly trying to figure out how to respond, because we know he doesn’t respond well to ridicule and diminishment,” Galen told Al Jazeera.

A group of RINO Republicans who failed badly 12 years ago, then again 8 years ago, and then got BADLY beaten by me, a political first timer, 4 years ago, have copied (no imagination) the concept of an ad from Ronald Reagan, “Morning in America”, doing everything possible to….

Lincoln Project ads are also not afraid to use an “edginess” and “iconography” that is more “martial in nature” than many Democratic ads, Galen noted – and that may resonate with conservatives used to Republican messaging.

Future of the party

Underscoring the attempt to defeat Trump is a larger question over the future of the Republican Party, which like the Democratic Party, represents a wide umbrella encompassing many ideological strains.

Trump’s 2016 win many ways highlighted that two major factions have been uneasily cohabiting for years within the Republican Party, said Thomas Patterson, a professor of government at Harvard Kennedy School.

“If the Republican Party was a European party in a parliamentary system, it would be made of two parties,” said Patterson. “What you might call ‘Liberal Republicans ‘, who would be the marketplace Republicans – they are much more about business, deregulation, and free markets. Then you’d have to the right of them a much more populist, nativist, nation-first kind of party, which is what most of the base at the moment is – and [what] Trump represents.”

Even if Trump loses, his base will remain, Patterson added.

That means whether in 2020 or 2024, the Republican Party is on track to face reckoning, said 43 Alumni for Biden’s Purcell – particularly as the overwhelmingly white and older Republican base faces a “demographic cliff” in a rapidly diversifying country.

“There’s no one out there who genuinely knows what that future looks like,” said Purcell. “Right now, both [Democratic and Republican] parties are pretty well dominated by their bases, and their bases are both moving further and further to the fringes.”

But in the short term, Purcell added, the group is more concerned with preventing “another four years of chaos and corruption and disease and disunion” that he says the Trump administration has wrought.

Shively said she shares the same goal, describing her discovery of Republican Voters Against Trump as a “revelation”.

“I was like, wow, there are actual people who feel the same way as I do,” she recalled. “I was just astonished because Oklahoma is such a deeply red state, and there are so many Trump supporters here that, you know, you don’t really want to out yourself among your social group”.

When she noticed only one conservative from Oklahoma had uploaded a video to RVAT’s website, she said she felt a responsibility to act.

“It made me feel like, if there’s anybody else like me out there, and they need this to change their mind, then hey, I’ll do it,” Shively said.

“So I sat down with my laptop, and I filmed my video,” she said. “I call it coming out of the political closet”.

The end of American history begins in America | Racism