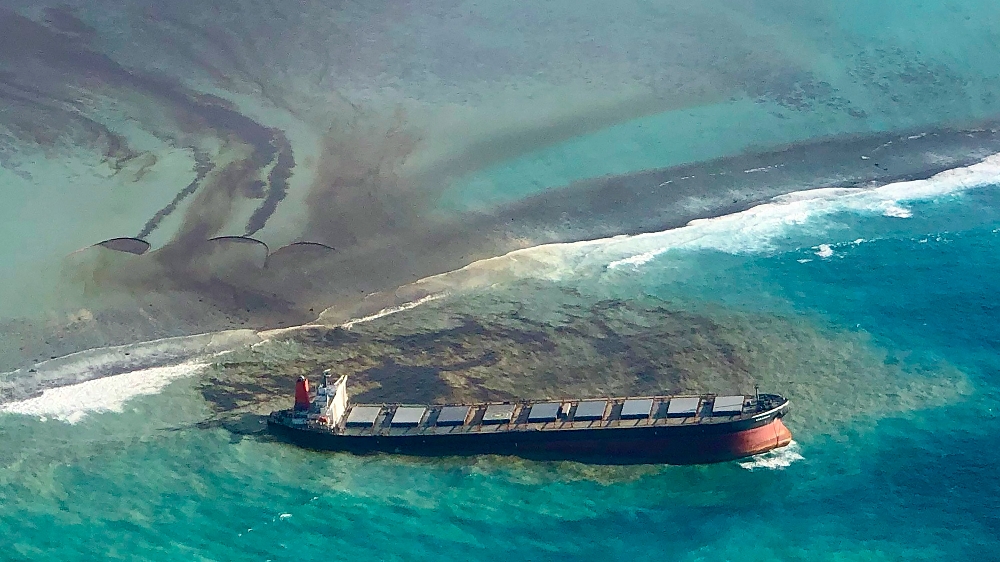 A second team of Japanese experts left for Mauritius on Wednesday with special oil-absorbent materials to help clean-up tonnes of oil that leaked from a Japanese-owned ship after it ran aground earlier this month.

“The oil leak from the stranded ship has caused severe damage to the people of Mauritius, the economy of which largely relies on tourism and the beautiful ocean,” environment ministry official Yukihiro Haisa told reporters before the departure.

“I am terribly distressed.”

Six members of the team are travelling to Mauritius from Japan, with the leader of the group joining from New York.

Haisa said the government of Mauritius has asked the team assess the leak’s impact on local coral reefs.

The Japanese-owned MV Wakashio ran aground on a coral reef on July 25 and began leaking oil more than a week later, spilling over 1,000 tonnes and threatening a protected marine park boasting mangrove forests and endangered species.

“We would like to apply our technical skills to help clean the oil-covered mangrove forests,” said Noriaki Sakaguchi, an environmental expert at the Japan International Cooperation Agency.

“Once damaged, it will take a long time for an ecological system to recover,” he said.

The team is bringing 20 boxes of special oil-absorbent materials capable of soaking up 1,200 litres (265 gallons) of oil in total.

The material has been donated by Tokyo-based company M-TechX and was used in an oil leak accident in Japan last year.

“I would like to see how we can use the absorbent material to clean the coastal area and the forests’ complex root structure tainted by oil,” Haisa said.

Tokyo has already dispatched one team of six experts, including a coastguard and diplomats, to aid in the response.

Both the Mauritian and Japanese governments have come under fire for not doing more immediately to prevent a large-scale spill.

Mauritian authorities on Tuesday arrested the Indian captain of the ship.

Officials have yet to reveal why the ship, which was making its way from Singapore to Brazil, came so close to the island, which is now reeling from ecological disaster.

The boat had been carrying 4,000 tonnes of oil, and salvage crews managed to pump some 3,000 tonnes out of the bulk carrier before it split in two on Sunday, preventing a much larger environmental catastrophe.