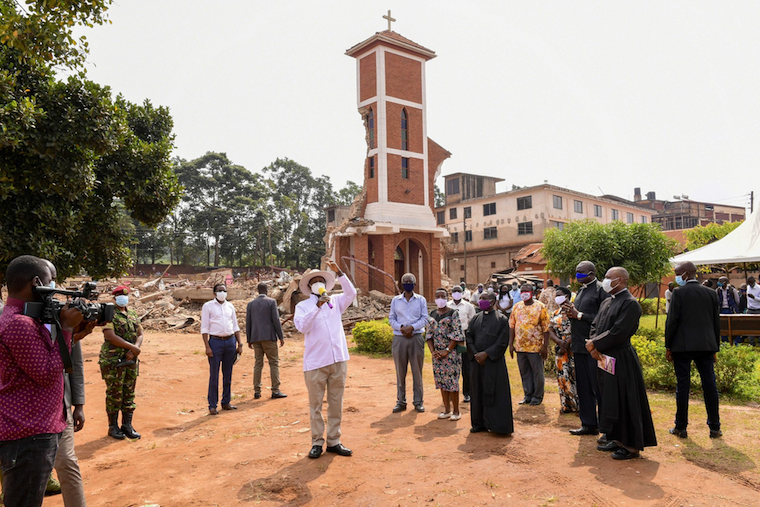 Last Monday night brazen demolition of St Peter’s church Ndeeba disrupted the quiet calm of its neighbourhood and that of the entire nation.

That demolition capped a three year protracted battle that was ultimately set in motion by the ruling of Justice John Eudes Keitirima of the High Court Land’s Division on August 06, 2017.

“It was held in the case of Fam International Limited and Ahmad Farah versus Mohamed El Faith [1994] KALR 307 that fraud is such a grotesque monster that the courts should hound it wherever it rears its head and wherever it seeks to take cover behind any legislation. Fraud unravels everything and vitiates all transactions,” Justice John Eudes Keitirima wrote in his judgment dated August 06, 2017.

That judgment written three years ago in one way or the other implicated the former leaders of the Church of Uganda and commissioner land registration in the fraudulent acquisition of a certificate of title comprised on Kibuga block 7 plot number 749.

This land is where St. Peter’s Church Ndeeba was built 40 years ago before it was demolished by men who have since been charged in court. The demolition was done in the wee hours of August 8, 2020, sending the country into pandemonium.

Court records show that while Nsubuga, Kizito and Kiteesa denied having any interest in the land, the commissioner land registration didn’t bother to file a defense despite repeated reminders by court via summons.

For its part, the Church of Uganda’s trustees admitted that Nachwa was the registered proprietor of the land now in dispute until March 3, 1981. And that when she transferred the land to Nsubuga, Kizito and Kiteesa, she ceased to have any interest in the land.

To prove that the special certificate of title was obtained fraudulently, during the hearing of the case, Nachwa’s son Balunga told court that it’s only him and his other three siblings that were appointed as administrators
of their mother’s estate.

He said they came across a letter, which they attached to their case, dated January 25, 1980 written by Nachwa to Barclays bank. Therein, she requested the bank, now called Absa, to receive for safe custody the certificate specified.

The bank received the title and on June 5, 1980 wrote to Nachwa asking her to present herself on issues of her deposited title. Though the administrators of Nachwa’s estate say they retrieved the duplicate certificate of title from the bank, when they attempted to have their names registered on the title as administrators, they found it was registered in the names of Bishop Nsubuga who headed the Namirembe diocese under whose jurisdiction St Peter’s church Ndeeba falls.

The chronology of events, Justice Keitirima ruled, was important to analyze the fraud.

It was argued by the administrators of Nachwa’s estate that the instrument, the application of special certificate of title and the declaration in support of such application were not available in the office of the commissioner land registration and none was produced in court by way of evidence.

They concluded the no-availability of such documents was apparent evidence that Nachwa didn’t make them and they were clearly forged. The legal team that represented the interests of Bishop Nsubuga’s family essentially distanced the late prelate from all the transactions that led to the registration of the disputed land into the names of Bishop Nsubuga as a joint owner and stated that the signatures attributable to the deceased through the documents relied on by the plaintiffs as having been used to register the same property into his joint names were forged.

Relying on the evidence of Bwanika Eddy, a retired police detective who investigated the case and found that the signatures of Bishop Nsubuga were forged and the lawyer who had executed the transfer forms never met the late Nachwa and that he had never met Bishop Nsubuga, Justice Keitirima had no option but to conclude this scheme was nothing but fraud.

“I agree with counsel of the said defendants’ submission that the fraud has been perpetuated by some unscrupulous people who may have used the defendant’s names especially in light of the fact that apart from the defendant’s names appearing on the special certificate of title there was no evidence to show that they were responsible,” Justice Keitirima ruled.

“The 4th defendant [commissioner land registration] should have been better placed to explain under what circumstances he or she issued the special certificate of title. However, the Commissioner Land registration never filed a defense. It was held in the case of Fredrick J.K. Zaabwe VS Orient Bank Limited and 5 others- S. C.C. A No. 4 of 2006 that failure to defend a suit imputes admissibility. In absence of any explanation by the 4th defendant imputes that he/ she was responsible for this mess.”

In their written defense, the trustees of the Church of Uganda claimed that Nachwa was the registered proprietor of the land until March 3, 1981 when she transferred it to Nsubuga, Kizito and Kiteesa and consequently ceased to have interest in the land.

The Church denied forging any signature of Nachwa. They said they were not aware of any transaction between Nachwa and Stanley Kigere and Nachwa and Dan Mbowa, which led to sub divisions of the land.

The land, the church’s lawyers argued, was registered in the names of Nsubuga, Kizito and Kiteesa not in their personal capacities but as constructive trustees of the Church of Uganda in accordance with the resolution of the Diocesan Synod of Namirembe Diocese sitting at Namirembe on October 10, 1971.

“At the material time and after the said resolution, it became the practice of the Anglican Church of Uganda to hold the same in trust for the Christians,” they insisted.

Through the Christians of St Peter’s church Ndeeba, the church said, it has been in possession of the land since 1981 and it has carried out several developments.

They include a church building, several houses for the clergy, a washing bay and motor vehicle with full knowledge of Nachwa. During her lifetime, they said, Nachwa never denied having given the land to the Church of Uganda nor challenged its occupation. The church says that after Nachwa passed way, it’s only then that his children started claiming the land and threatened to evict the church.

“Therefore, in absence of evidence of compliance with the said Act, no persons can be registered as proprietors of land and claim to be trustees of a community. The said three defendants were therefore registered individually as proprietors and not as trustees of the suit land since they had not complied with the Trustees Incorporation Act Cap 165.”

The judge who went ahead to order the Commissioner Land Registration to change names of the title into those of Evairini Nachwa.