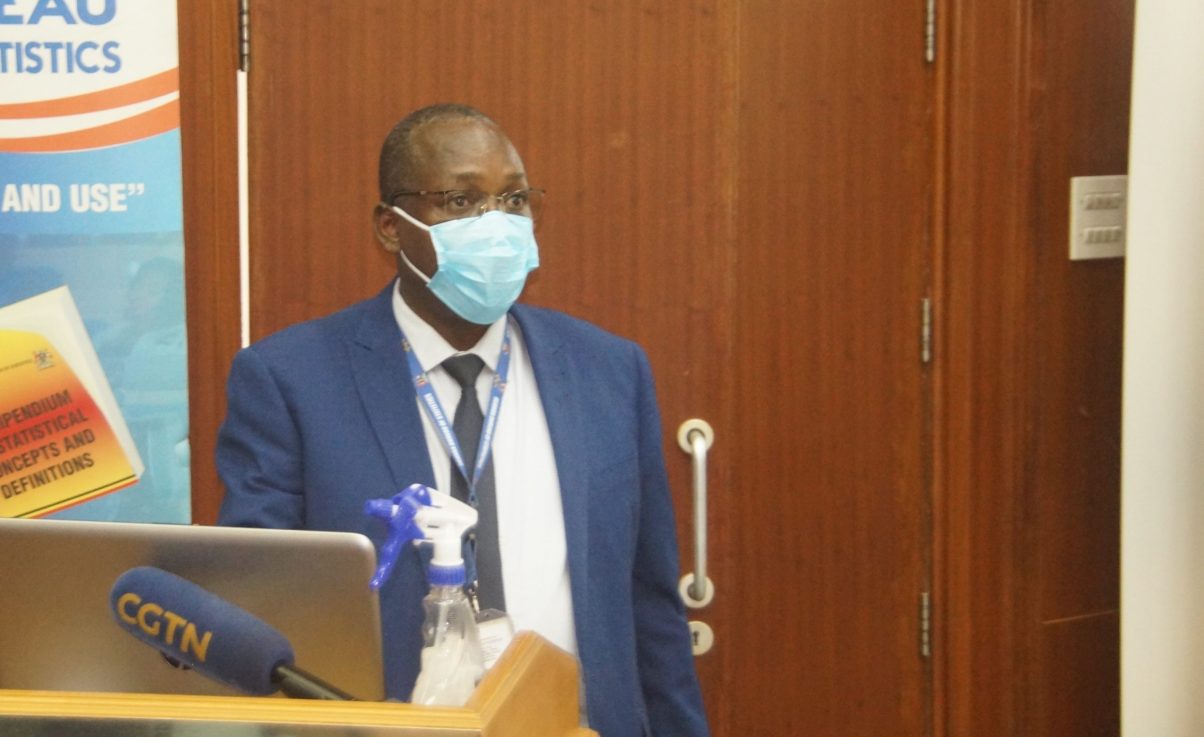 A recent report by Uganda Bureau of Statistics (UBOS) has revealed that between the months of March and April 2020, Uganda’s Gross output went down from 7.3 trillion shillings to 5.8 trillion shillings, representing a 21% reduction.

The report was drafted from a High Frequency Phone Survey by UBOS with support by the World Bank to assess COVID-19 impacts on the social economic wellbeing in a wide range of areas including food security, job loss, reduced aid, increased domestic violence, loss of remittances and negative coping strategies.

The findings are based on two surveys, that is households and businesses.

The survey on households collected information on knowledge, behavior and concerns related to COVID-19 transmission in addition to access to basic needs, employment and livelihood, safety nets, shocks, agriculture and other businesses.

The high frequency phone survey was launched in June 2020 and had it’s first round of findings released today Wednesday 19th August 2020. It will be implemented for 12 rounds on a monthly basis meaning that it will take a period 12 months.

The survey about COVID-19 impacts on business covered formal business establishments and has two modules, that is production module (Gross output) and business operations dynamics module.

William Anguyo, the acting Director Business and Industry Statistics at UBOS who presented the survey findings on businesses said that an administrative data for 25,616 formal establishments and 324 public institutions were covered under production module while 2,377 private business establishments and key areas of employment, capacity utilization, coping mechanisms and introduction of new products were covered under business operations dynamics module.

Anguyo revealed that the overall estimated Gross output went down from 7.3 trillion shillings in March to 5.8 trillion in April 2020 representing a 21% reduction.

On the issue of operation status, Anguyo said, “about 29% of the businesses closed operations during the period, with majority being in Real Estate, arts and entertainment and recreation sectors. Majority of the businesses that remained operational were agriculture and forestry, public administration and defense, social security, human health and social work. We are all aware that hospitals, clinics remained open.”

On capacity utilization, the report revealed that for the manufacturing sector, about 34.8% and 34.5% of establishments operated between 26% to 50% and 51% to 75% respectively.

On the issue of payroll size, the survey established that 51.5% of the establishments reduced their payroll size as a result of the lockdown.

The most affected sectors were accommodation and food service at 77.4%, transport and storage at 62.2%, administration and support at 79.7%, manufacturing at 59.4%, trade (wholesale and retail) at 45.1% and arts, entertainment and Recreation Sectors at 50.2%.

However, the utilities sector such as power generation and distribution, water and sewerage, public administration such as policing, defense, tax bodies and civil service were least affected by the reduction of payroll size.

On the issue of safety measures, the report revealed that over three quarters (85.8%) of businesses put in place safety measures in order to mitigate the spread of COVID-19 pandemic.

Stephen Baryahirwa, the acting Director socio economic surveys at UBOS who presented the findings of COVID-19 impacts on household level said that topics such as knowledge, behavior and concerns about COVID-19, access to goods and services, employment, agricultural activities, income losses, food service, shocks and coping strategies and safety nets were tackled.

Baryahirwa said that 83% of respondents reported dry cough to be COVID-19 symptom and there was no significant differences in reporting by the level of respondent’s education.

“On the other hand, while fever was mentioned by 67% of respondents, the awareness of this symptom was significantly lower among those that never attended school (48%). Only 36% of respondents named shortness of breath as a COVID-19 symptom and almost nobody mentioned loss of smell or taste (4%),” said Baryahirwa.

The respondents were well informed about the important preventive measures such as hand washing (100%), avoiding gatherings (98%), wearing of face masks (95%), social distancing (91%) and avoiding touching the face (86%).

On the issue of access to basic needs, less than 1% of households had issues accessing water while almost 18% struggled having enough soap to wash hands. This share is largely in rural areas (20%) and among the poorest households (30%). The absolute majority of those who did not have enough soap, point to economic reasons; 67% could not afford it, 13% had no cash to buy while 8% said high prices.

On access to staple and non-staple food, most households needed to buy the main staple food, but the ratio is lower in rural areas (72%) than urban areas (85%).

Concerning employment and livelihood, the report revealed that 70% of the respondents were still working the week before the interview, more than half of the non working respondents stopped working after the restrictions were put in place in response to COVID-19 transmission.

More than 17% of respondents in central and Eastern Uganda stopped working after 20th March when the government closed schools and public offices.

Since COVID-19 outbreak, 87% of households have reported reduced income or no earnings from at least one of their sources of livelihood.

Related Topics:Business
Up Next