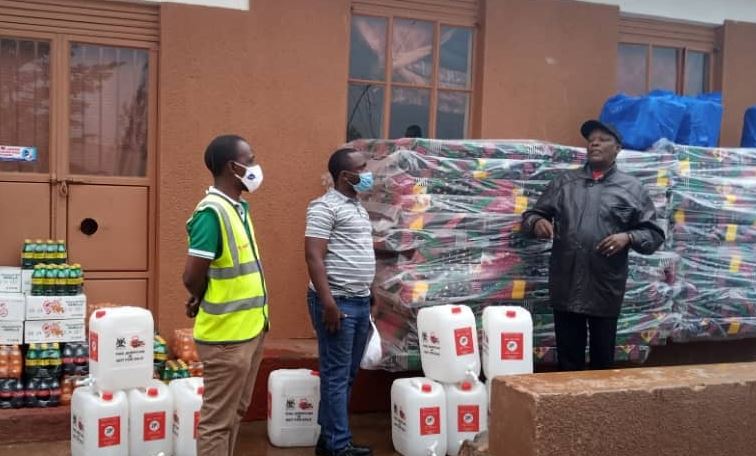 Coca-Cola Beverages Africa in Uganda has donated a consignment of beddings to Adullam Orphanage in Mbarara in appreciation of the generosity the orphanage showed to the Company during the COVID-19 lockdown.

Following a government directive in March that factories would only be allowed to operate if their staff lived in camps at their Plants, Adullam Orphanage offered beds and mattresses to Century Bottling Company staff in Mbarara to enable factory operations to continue.

The Orphanage insisted on providing the support free of charge.

Bishop Naboth Tumuhairwe, the Director of Adullam Orphanage, explained that his institution appreciated Coca-Cola for the company’s generosity and spirit of helping the community.

“When the Company officials approached me with a request to hire our beds because schools had been closed yet the factories needed to open camps, I just gave freely. Coca-Cola have been good neighbours in our community. In my spirit I felt that, as I had received freely before, so I should give freely,” he said, during the handover in Mbarara.

“It was a surprise to me when they contacted me again recently and then came bringing these gifts! This has brought great joy to us. Thank you, Coca-Cola, keep up the spirit of helping people, we will always pray for the company. May God bless you,” he said.

The orphanage provided 62 beds and mattresses to the employees for the entire duration of the Lockdown Camp.

Coca-Cola Beverages Africa in Uganda (Century & Rwenzori Bottling Companies) General Manager, Melkamu Abebe, said the company was deeply appreciative of the offer and had decided to be responsive.

“Adullum Orphanage helped us move quickly into camping, and supported our continued operations. This, in turn, ensured that we could carry on with our responsibility to keep contributing to the economy by producing refreshments, paying salaries, and keeping the trade running,” Abebe said, through Mbarara Plant Manager Joackim Baluku.

“Our focus as a company is our People and that includes our employees and
their families, as well as our Community. Offering this consignment of beddings to Adullum is the least we could do to support the Orphanage and School, in return for their support to us. We are grateful to our community of people who always rise up when we need them,” he added.

Abebe emphasized that Coca-Cola Beverages Africa’s ‘People First’ policy was being reciprocated by people in the communities because it is the right
attitude to take in business.

“Being people-centered is not a business decision – it is a business imperative so the company will always find meaningful ways to contribute to the communities we serve,” he said.

On top of the consignment of 40 mattresses and 40 sets of bedsheets, Coca-Cola Beverages Africa also gave the Orphanage a set of drinks that included
Climb-Up flavoured milk, made from milk from Uganda.