United States Postmaster General Louis DeJoy will suspend all operational reforms and initiatives until after the November presidential election, he said in a statement.

The move comes amid an outcry by Democrats and others that service cuts could slow the handling of mail-in ballots, the use of which is expected to skyrocket for the election as the coronavirus pandemic raises fears of crowds.

“To avoid even the appearance of any impact on election mail, I am suspending these initiatives until after the election is concluded,” DeJoy said in the statement (PDF).

Democrats and other critics have accused the Republican president of trying to hobble the United States Postal Service (USPS) to suppress mail-in voting as he trails Democratic presidential challenger Joe Biden in opinion polls ahead of the November 3 election.

DeJoy said the USPS will not change retail hours at post offices, mail collection boxes will remain where they are, and no mail processing facilities will be closed. He also announced an expansion of a task force on election mail to include postal unions.

Demonstrators march to the condo of US Postmaster General Louis DeJoy, to protest against changes in the postal service in Washington, DC, the US [Cheriss May/Reuters]

The move followed a lengthy call by the postal board of governors on Monday night, two people briefed on the matter said.

Trump said last week that he was against Democratic efforts to include funds for the USPS and election infrastructure in coronavirus relief legislation because he wanted to limit mail-in voting during the coronavirus pandemic.

Earlier on Tuesday, states including Washington, Pennsylvania, Connecticut and New York said they were planning legal moves to block the cuts.

“The integrity of our elections is fundamental to our nation’s democracy and we won’t allow anyone to undermine them, not even the president of the United States,” New York Attorney General Letitia James said.

Trump has repeatedly and without evidence claimed that mail balloting is vulnerable to fraud. Voting by mail is nothing new in the US, and one in four voters cast ballots that way in 2016.

DeJoy is scheduled to testify on Friday before the Republican-led US Senate Homeland Security and Governmental Affairs Committee, spokespeople for the committee and the USPS said. DeJoy, a major political donor and ally of Trump, assumed the job in June.

DeJoy also is scheduled to testify on Monday before the Democratic-led House of Representatives Committee on Oversight and Reform.

Democrats have raised concerns that USPS cost-cutting could lead to missed or delayed ballots. They have pointed to reductions in overtime, restrictions on extra mail transportation trips and new mail sorting and delivery policies as changes that threaten to slow mail delivery – and in some cases, already have.

Mark Dimondstein, president of the American Postal Workers Union that represents more than 200,000 employees, told Fox News that DeJoy’s policy changes “are truly slowing down mail, the customers see it … the postal workers see it – mail is getting all backed up”. 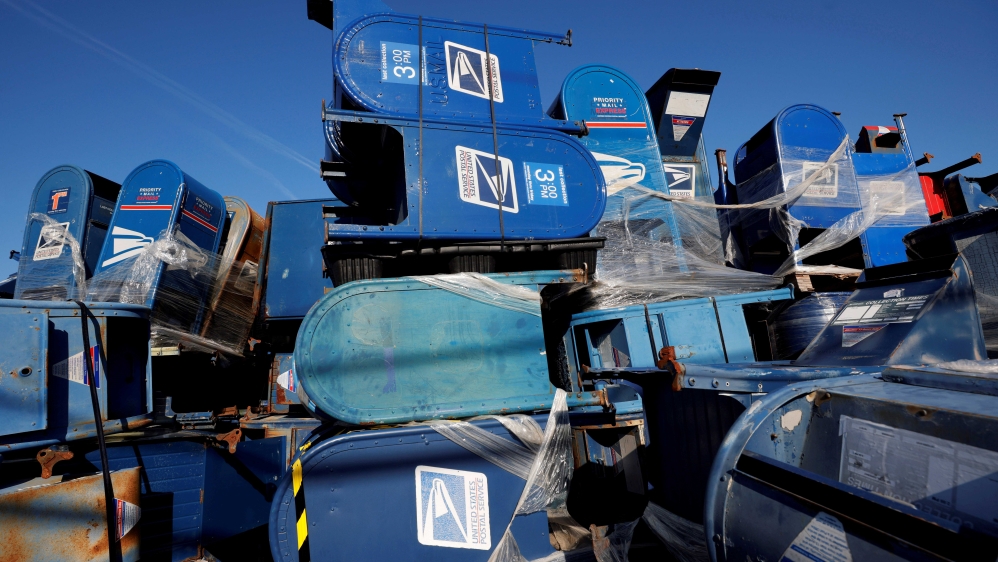 United States Postal Service postboxes or mailboxes stacked in Hartford, Wisconsin, the US; people who live nearby say the pile had grown noticeably larger in recent weeks [Brian Snyder/Reuters]

The announcement by DeJoy came after key Republicans had sounded the alarm.

In the pivotal swing state of Ohio, Attorney General Dave Yost had pleaded with Trump to postpone any needed changes to the USPS until after Election Day. Senator Rob Portman and other Republicans in Ohio’s congressional delegation urged DeJoy to “ensure timely and accurate delivery of election-related materials”.

At the White House, Trump levelled fresh assaults Tuesday on mail-in voting and universal ballots. More Americans than ever are expected to choose to vote absentee this year instead of risking health concerns by voting at polling places during the coronavirus outbreak.

“You can’t have millions and millions of ballots sent all over the place, sent to people that are dead, sent to dogs, cats, sent everywhere,” Trump told reporters.

“This isn’t games and you have to get it right,” Trump said.

Trump made clear last week that he was blocking $25bn emergency aid to the USPS, acknowledging he wanted to curtail election mail operations, as well as a Democratic proposal to provide $3.6bn in additional election money to the states to help process an expected surge of mail-in ballots.

Congress is not in session but Speaker Nancy Pelosi is calling the House back to Washington over the crisis at the USPS, setting up a political showdown amid growing concerns that the Trump White House is trying to undermine the agency ahead of the election.

The House is expected to vote Saturday on legislation that would prohibit changes at the agency. The package will also include $25bn to shore up the USPS, which faces continued financial losses.

The top Democrat on the Homeland Security panel seeking DeJoy’s testimony, Senator Gary Peters of Michigan, called the USPS “a lifeline” to Americans.

“We must ensure they can continue to count on dependable and timely delivery,” said Peters. 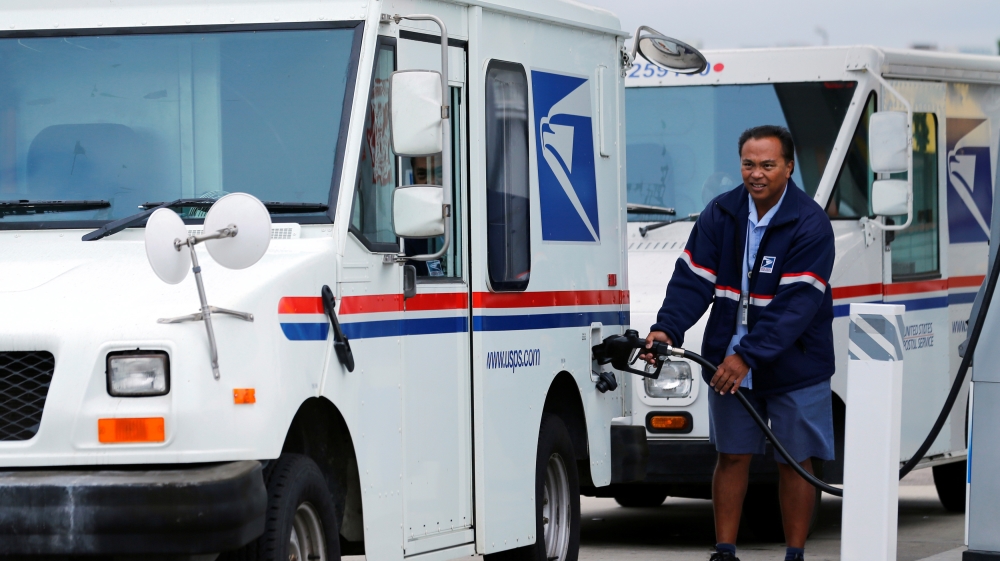 Ahead of the election, DeJoy, a former supply-chain CEO who took over the USPS in June, has sparked nationwide outcry over delays, new prices and cutbacks just as millions of Americans will be trying to vote by mail and polling places during the COVID-19 crisis.

Trump has defended DeJoy, but also criticised postal operations and claimed that universal mail-in ballots would be “a disaster”.

Experts say examples of ballot fraud have been overstated. The Brennan Center for Justice in 2017 ranked the risk of ballot fraud at 0.00004 percent to 0.0009 percent, based on studies of past elections.

In a letter to postal staffers last week obtained by The Associated Press, DeJoy said his policies have brought “unintended consequences that impacted our overall service levels,” but added that the USPS “must make a number of significant changes which will not be easy, but which are necessary.”

Nate Castro, a postal staffer and union shop steward in Florida with more than three decades of experience, said the rationale behind DeJoy’s policy changes has been unclear.

“He’s on express mode where he’s not even taking the advice of people that are experienced for years,” said Castro.

What is behind Thai protesters’ calls for monarchy reform? | Asia Pacific