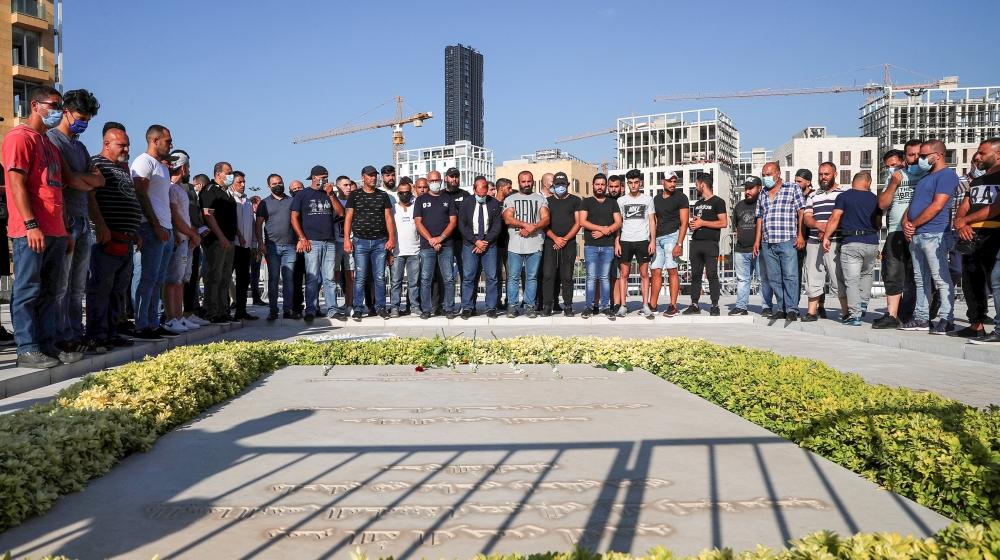 A United Nations-backed tribunal has found a member of the Lebanese group Hezbollah guilty of assassinating former Prime Minister Rafik Hariri in a massive bomb blast in 2005.

While Salim Ayyash was convicted, the three other Hezbollah suspects were cleared of the charges on Tuesday.

The verdict by the Special Tribunal for Lebanon (STL) – an international court based near The Hague, Netherlands – came more than 15 years after Hariri was killed on February 14, 2005, along with 21 others in the huge explosion in the capital, Beirut.

“We accept the verdict of the tribunal and want justice to be implemented,” said former Prime Minister Saad Hariri, adding that he wants “just punishment” for the criminals.

Hariri said those who assassinated his father aimed to “change the face of Lebanon and its system and its civilised identity” and said there will be “no compromise” on this matter.

The four members of Iran-backed militia and political party Hezbollah were accused of organising and carrying out the attack, although the group was not formally charged and it denied any involvement.

The four – Salim Ayyash, Assad Sabra, Hassan Oneissi, and Hassan Habib Merhi – were tried in absentia as Hezbollah refused to disclose their whereabouts.

Ayyash used a mobile phone identified by prosecutors as critical in the attack, a judge said.

The STL is “satisfied beyond a reasonable doubt” the evidence showed that Ayyash used the phone, Judge Micheline Braidy said, reading a summary of the 2,600-page verdict.

However, prosecutors provided insufficient evidence to prove the three others were accomplices, said Judge Janet Nosworthy.

‘Designed to cause fear’

Presiding Judge David Re said the evidence was largely based on mobile phone network data with the suspects accused of tracking Hariri’s movements in the months leading up to the attack, and the phones going “dark” after the blast.

Judge Nosworthy said four different networks of mobile phones “were interconnected and coordinated with each other, and operated as covert networks at the relevant times”.

The court found the killing was politically motivated in an “act of terrorism designed to cause fear in the Lebanese population”.

“The tribunal has found beyond a reasonable doubt that a suicide bomber triggered the blast,” said Re, reading out the verdict.

The assassination plunged Lebanon into what was then its worst crisis since the 1975-90 civil war, setting the stage for years of confrontation between rival political factions.

Syrian forces, which were based in Lebanon for more than 40 years, were forced to withdraw from the country as many Lebanese blamed Damascus for the killing.

The government of Bashar al-Assad has denied any involvement.

The tribunal exonerated the leadership of Hezbollah and Syria citing a lack of evidence.

“The trial chamber is of the view that Syria and Hezbollah may have had motives to eliminate Mr Hariri and some of his political allies,” said Re.

According to Al Jazeera’s Zeina Khodr, the verdict “indirectly points the finger at Hezbollah”. The UN court is not allowed to indict countries, governments or organisations, but can only issue verdicts on individuals, she said.

It is not clear, however, what will be the ruling’s real consequences, Khodr explained.

Following the UN tribunal’s decision, Lebanon should hand over suspect Salim Ayyash, but the government, where Hezbollah and its allies hold political power, is not expected to do so.

The group’s secretary-general, Hassan Nasrallah, has repeatedly said he would never hand over any member of the movement, insisting last week on the innocence of the suspects and describing the tribunal as a conspiracy against the group.

If the case is then referred to the UN Security Council, its internal division would make it impossible to implement the verdict.

“So the question is,” said Khodr, “will Lebanon’s international relations be affected taking into account that Hezbollah and its allies control political power? Or will this open the door to some sort of compromise between Hezbollah and the former PM Hariri who is now in the opposition and a possible candidate to head the next government?”

‘Go after the leadership’

Toby Cadman, an international human rights lawyer, said the tribunal did not shed new light on the killing, but was noteworthy for being the first trial of its kind to rely entirely on “cell site analysis” as evidence.

He noted after all the time and money spent, only mid to low-level perpetrators were convicted in the assassination.

“If you go back to the beginning of the trial, in the opening speech of the prosecutor there was a reference to the Syrian regime, so there was an attempt to implicate the Assad regime and to go after the leadership. Unfortunately, whether it is a lack of independent evidence to produce such a link is anyone’s guess,” Cadman told Al Jazeera.

“From the outside perspective, there would have been more satisfaction after close to $1bn spent that it would have gone after those who actually ordered it.”

Initially, five suspects were identified – all Hezbollah members. Charges against one of the group’s top military commanders, Mustafa Badreddine, were dropped after he was killed in Syria in 2016.

Ayyash’s sentence will be handed down at a later date. The UN-backed court has no death penalty and maximum jail sentences are life imprisonment.

Related Topics:HezbollahLebanonMiddle East
Up Next