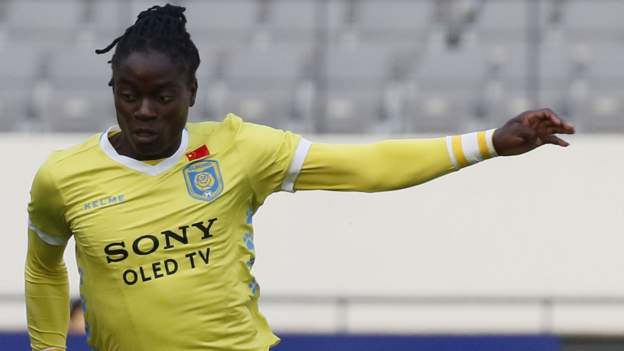 When the Chinese Women’s Super League resumes this weekend it will feature Malawian sisters Tabitha and Temwa Chawinga.

This season will be the first time the sisters have played against each other competitively having appeared together for the national team, Malawian club DD Sunshine and Swedish side Kvarnsveden.

Temwa, 21, will be playing for Wuhan FC and hoping to follow in her big sister’s footsteps after Tabitha was recently voted the league’s Player of the Year for a second year in a row.

Tabitha, 24, earned the award after emerging the league’s top scorer and helping her club Jiangsu Suning become not only champions for the first time in 10 years but also added two other domestic titles to complete a treble.

“She’s a very good player, and the thing is everyone will be working hard to make her team and fans happy,” Tabitha told BBC Sport Africa.

Temwa admits there will be some sibling rivalry: “Both of us will do our best to see who the best player is.”

“Back home the family are very happy about us. My parents never thought their children would one day play football outside of the country, but now it’s happening.”

But she is also thankful to Tabitha for her help in getting her career started.

“My sister has been instrumental in my career progression.” Temwa told BBC Sport Africa.

“She of course made connections for me to leave Malawi to play abroad, but most importantly has always advised me to fight hard, to know what I want and to pursue it without listening to distracting people.”

Developing a football career for the sisters has not been straightforward, especially given that Malawi is more famous for its netballers than its women footballers.

Malawi have never qualified for the finals of the Women’s Africa Cup of Nations and so a bit of luck was needed to launch the sisters’ footballing journey.

Tabitha’s journey began when someone spotted her talent as she played in her village with the boys and helped her move to the capital Lilongwe to join DD Sunshine, one of the very few serious women football teams in the country.

“Growing up, I never saw myself as different from boys – whatever they did, I believed I could, and went for it,” she explained.

Her next bit of good fortune was when a young American lady working for a local NGO was persuaded to join DD Sunshine, by two colleagues who were players at the club.

She was later transferred to Sweden by the NGO, where she decided that apart from working she would continue to pursue her newly-found passion of football.

When she approached Krokom Dvarsatts, who were in the Swedish third Division at the time, the club was meticulous in enquiring of where she had played before to make sure they did not violate any transfer rules.

The club contacted DD Sunshine owner David Dube to discuss terms of transfer for the American and he said they could take her without paying on condition they would try out another of his players whom he believed was more talented.

“When Krokom Dvarsatts hesitated, Mr Dube offered to pay visa and flight costs for me to travel to Sweden for trials,” says Tabitha.

“I joined the team for training on the same day I arrived and they were immediately impressed with my strength, dribbling, shooting from far and scoring skills.”

And so in 2014 she became Malawi’s first ever female footballer to play in Europe, her competitive debut was delayed for a few weeks as she was only 17 at the time.

But once she was 18 there was no stopping the young striker as she scored 39 goals in 14 games to emerge as the league’s top scorer.

The following season Tabitha joined second-tier side Kvarnsveden where she continued her exploits, netting 43 goals and helping the club earn promotion to the top league.

The forward’s skills caught the attention of several clubs in Europe, but in January 2018 she chose to accept an offer from Jiangsu Suning to play in the Chinese Women’s Super League.

Before she left Kvarnsveden the club naturally were keen to find a replacement of her calibre and and so Tabitha immediately suggested her younger sister Temwa, who was playing for DD Sunshine.

“The club owner resisted because he did not believe Malawi could produce another good player like me, but I fought hard for my sister, so they eventually agreed to invite her for trials and they signed her,” Tabitha explained.

As Temwa embarked on her European journey her sister made an immediate impact in China.

Tabitha won the golden boot by scoring 17 goals, seven better than Nigeria striker and three-time African Footballer of the Year Asisat Oshoala, who has since moved to Spanish club Barcelona.

Back in Sweden Temwa had been making a name for herself and emulating her big sister as one of the leading scorers for Kvarnsveden, and last season she was top scorer in the league with 35 goals.

Once again big sister was more than happy to recommend Temwa as agents in China were talking to her about how to find an all rounded player like her.

Tabitha had just after she scored 12 goals in 14 games helping Jiangsu clinch the 2019 Chinese league title that they had last won 10 years earlier.

“I recommended my sister Temwa, and I did not have to explain a lot because she was top scorer in Sweden and so Wuhan FC were quick to sign her,” she explained.

Temwa is not concerned that she is in the city where the coronavirus was first seen and is just looking forward to playing football again.

“I feel great because the league is starting again; it was disappointing for it to be cancelled when I had just arrived but then it had to be that way because of Corona,” she said,

“During that period I have been staying indoors and doing some training to keep fit. I did some gym stuff and juggling the ball.

“It will be tough for me since it is my first season while my sister has been here for close to three years, but I will try my best because the club has entrusted me with massive opportunity.”

On the pitch the pair are also helping improve the fortunes of the national team as they led the team to the second round of Tokyo Olympic qualifiers with 14-1 aggregate win over neighbours Mozambique.

They won the home leg 11-1 with Temwa scoring five times to outshine her big sister, who ‘only’ managed a hat-trick.

In the second round they beat Kenya 3-2 in Malawi, with two goals from Tabitha, but then lost 3-0 in the return leg.

The sisters’ achievements have not gone unnoticed back in Malawi with Tabitha not only being named captain of her national team but also being named Malawi Sports Personality of the Year and Sports Woman of the Year in 2019.