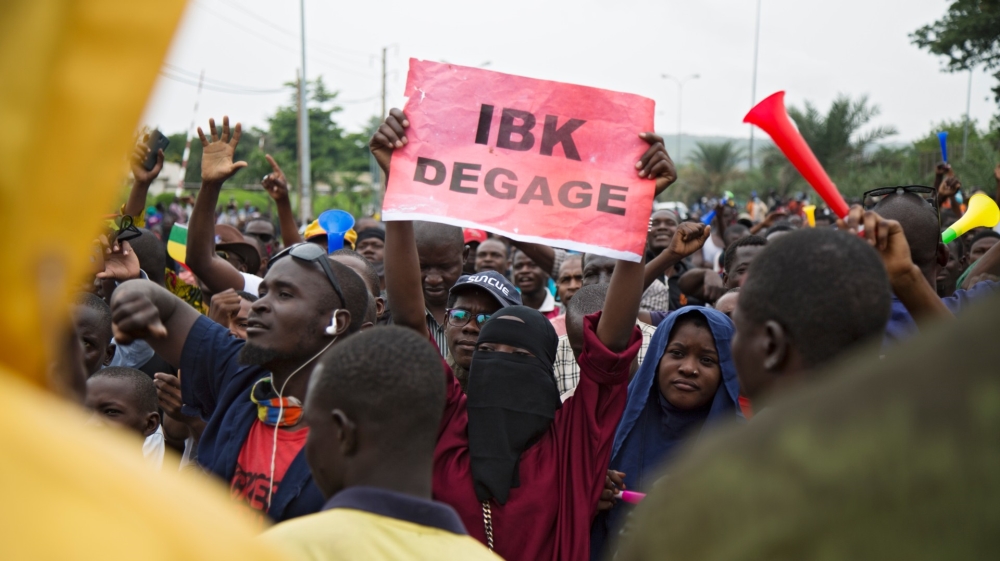 There have been multiple reports of Malian soldiers taking up arms and staging an apparent mutiny in the town of Kati, just 15km (nine miles) from the capital, Bamako.

Tens of thousands of people have poured onto the streets of Bamako in recent weeks amid growing dissatisfaction over alleged electoral malpractice and corruption.

The so-called opposition June 5 Movement also accuses Keita of allowing Mali’s economy to collapse and of mishandling a spiralling security situation in the northern and central regions that has entangled regional and international governments, as well as a United Nations mission that is considered the most lethal of any currently active.

The violence, in which ideologically-motivated armed groups have stoked ethnic tensions while jockeying for power, has spilled into the neighbouring countries of Niger and Burkina Faso, destabilising the wider Sahel region and creating a massive humanitarian crisis.

Underscoring the fear of Mali falling into further disarray over the political crisis, regional leaders have stepped in to mediate and urged Keita to share power in a unity government.

The 75-year-old president has also proposed some concessions, but these moves have been roundly rejected by opposition leaders who remain steadfast in calling for Keita’s departure.

What caused the unrest

Political tension has been simmering since Keita won re-election in August 2018 in a poll that opposition parties said was marred by irregularities.

The government pushed ahead with a legislative election in March despite the coronavirus outbreak, and drew further ire after the Constitutional Court overturned 31 of the results. That decision handed Keita’s party 10 more parliamentary seats, making it the largest bloc.

Also in March, unidentified gunmen abducted Mali’s main opposition leader, Soumaila Cisse, as he campaigned in the country’s volatile centre. He has not been heard from since.

Meanwhile, there have been continuous allegations of corruption and power consolidation among the government elite, fuelled by recently published images of the president’s son partying on a yacht abroad.

This comes as citizens continue to struggle under Mali’s crumbling economy, which depends largely on gold and cotton and has been badly affected by the devolving security situation and the coronavirus pandemic.

The country also faces chronic lacks in road and electricity infrastructure, as well as access to healthcare, food and water. According to World Bank figures, more than 40 percent of Mali’s 20 million people experience extreme poverty.

Moreover, the deteriorating security situation remains a constant backdrop to the protests, which have taken place in the country’s more stable south.

Mali has struggled to regain stability since 2012, when ethnic Tuareg rebels and loosely aligned armed groups seized the northern two-thirds of the country, leading former colonial power France to intervene to temporarily beat them back.

As the government and international actors have sought to restore peace in the north, the country’s central region, where the state is largely absent, has further devolved, with violence steadily increasing.

Those attacks grew fivefold between 2016 and 2020, with 4,000 people killed in Mali, Niger and Burkina Faso, up from about 770 in 2016, according to the UN. Hundreds of thousands of people have been forced to flee from their homes and thousands of schools have closed.

The centre of Mali has become a sort of launchpad for al-Qaeda and ISIL-linked groups to attack neighbouring countries. Regional leaders fear the violence could further spread into the generally more stable West African coastal countries if the political unrest creates further instability.

International powers, particularly France, which has had a military presence in Mali since 2013, are also worried the crisis could undermine multibillion-dollar efforts to contain the armed groups. The continued displacement caused by the violence, European leaders fear, may also fuel another wave of migration to their shores.

There is also concern among regional leaders about the precedent that would be set if Keita is forced to step down.

Mediators from the 15-member regional bloc Economic Community of West African States have proposed the creation of a unity government but draw the line at what they describe as an unconstitutional change in power.

On Tuesday, ECOWAS urged the soldiers “to return to their barracks without delay”.