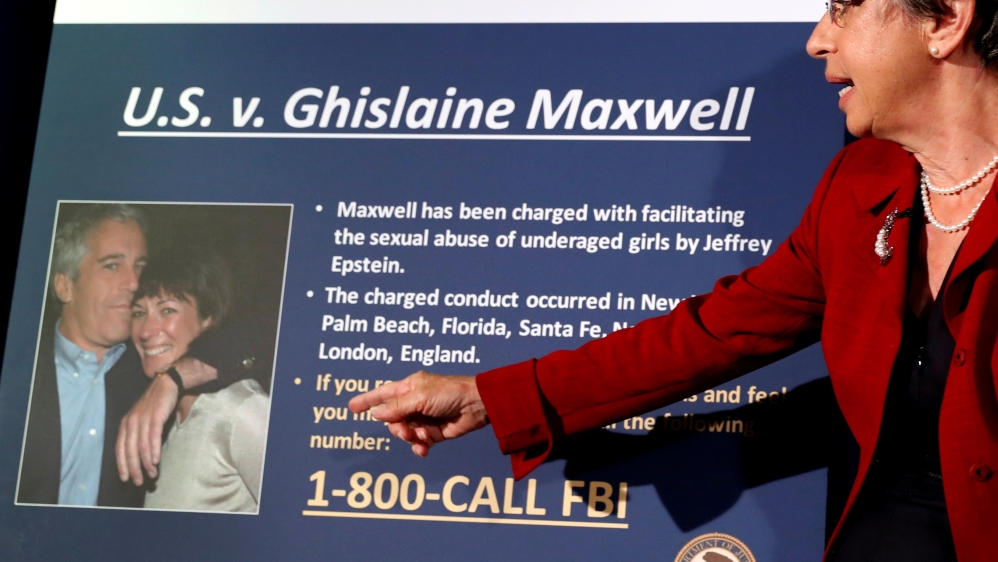 An appeals court in the United States on Friday temporarily delayed the release of a 2016 deposition about Ghislaine Maxwell’s sex life, after she argued it could destroy her ability to get a fair trial against criminal charges she aided the late financier Jeffrey Epstein’s sexual abuse of girls.

The 2nd US Circuit Court of Appeals issued the order after last-ditch scrambles by Maxwell to keep potentially embarrassing information, which her lawyer said could make it “difficult if not impossible” to find an impartial jury, out of the public eye.

Maxwell’s appeal will be heard on an expedited basis, with oral argument scheduled for September 22.

Her deposition had been taken in April 2016 for a now-settled civil defamation lawsuit against the British socialite by Virginia Giuffre, who had accused Epstein of having kept her as a “sex slave” with Maxwell’s assistance.

Later in that interview:

V: He told me a long time ago that everyone owes him favors. They’re all in each other’s pockets.

JS: When you say you asked him why is Bill Clinton here, where was here?

V: On the island.

Dozens of other documents from that case were released late on Thursday, after the presiding judge concluded that the public had a right to see them.

The release of Maxwell’s deposition had been scheduled for Monday, pending the outcome of the appeal.

Maxwell, 58, has pleaded not guilty to helping Epstein recruit and eventually abuse three girls from 1994 to 1997, and committing perjury by denying her involvement under oath.

She was arrested on July 2 and has been held in a Brooklyn jail after a judge denied bail, calling her a flight risk. Maxwell’s trial is scheduled for next July.

Epstein was found hanged at age 66 last August in a Manhattan jail, while awaiting trial on sex trafficking charges for abusing women and girls in Manhattan and Florida from 2002 to 2005. He had also pleaded not guilty.

In seeking to keep Maxwell’s deposition sealed, her lawyers said in court papers on Thursday she had been promised confidentiality by Giuffre’s lawyers and the presiding judge at the time, through an agreed-upon protective order, before answering many personal, sensitive and “allegedly incriminatory” questions about her dealings with Epstein.

They said further that Maxwell was blindsided when prosecutors quoted from the deposition in her indictment, and accusing Giuffre of leaking the deposition to the government.

In a court filing on Friday, Giuffre’s lawyers called Maxwell’s appeal “frivolous, and a transparent attempt to further delay the release of documents to which the public has a clear and unequivocal right to access”.

Friday’s order also covers a second deposition by an unnamed Epstein accuser that Maxwell also wanted to be kept under seal. Other documents from Giuffre’s lawsuit that quote or disclose information from the depositions also remain sealed.

Among the documents released on Thursday were a few emails between Epstein and Maxwell dated January 2015, including one where Epstein told Maxwell that she had done “nothing wrong”.

Lawyers for Maxwell said on July 10 in a court filing requesting bail in her criminal case that she had not been in contact with Epstein for “more than a decade”.

Maxwell is now battling prosecutors in her criminal case about the scope of a protective order intended to protect her right to a fair trial while ensuring the privacy of her accusers.