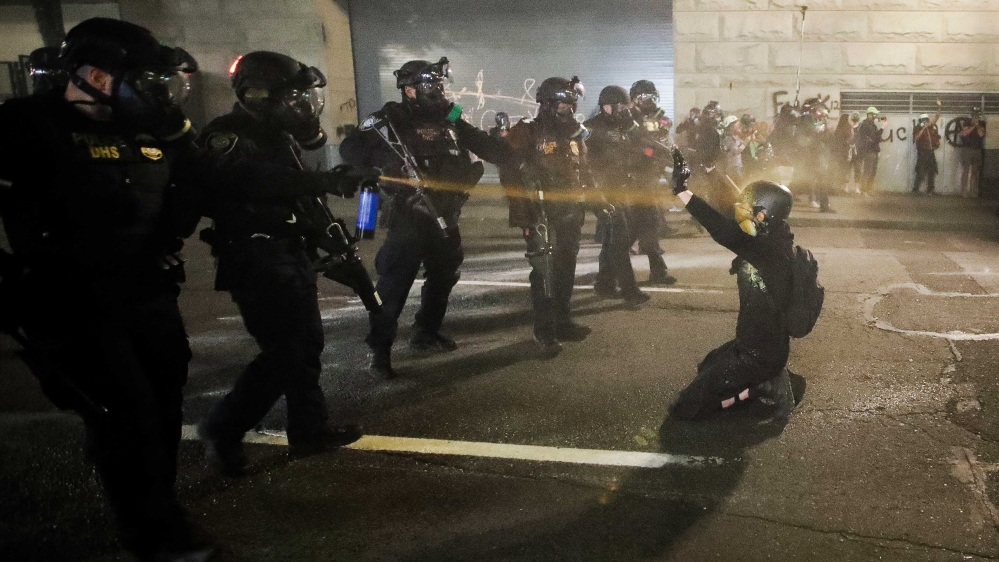 Oregon police prepared Thursday to take over protecting a federal courthouse in Portland that’s been a target of violent protests, in a deal between the Democratic governor and the administration of US President Donald Trump that aimed to draw down the federal presence and offered hope for a much-needed detente in a city roiled by two months of unrest.

Portland police cleared out a park across from the Mark O Hatfield Federal Courthouse that demonstrators have used as a staging ground, while state troopers headed into downtown Portland in preparation for their first night policing the protests against racial injustice. It is not clear if the move will ease tensions in the liberal city, where people are decrying brutality by law enforcement.

Under the deal announced by Governor Kate Brown, federal agents sent by Trump were to begin a phased withdrawal Thursday, with Oregon State Police taking over outside the building. But federal officials have pushed back, saying agents would not leave the city completely but be on standby in case they are needed.

Trump insisted in a tweet that US officers would stay in Portland until the violence was under control.

Kate Brown, Governor of Oregon, isn’t doing her job. She must clear out, and in some cases arrest, the Anarchists & Agitators in Portland. If she can’t do it, the Federal Government will do it for her. We will not be leaving until there is safety!

“If she can’t do it, the Federal Government will do it for her. We will not be leaving until there is safety!” Trump wrote about Brown, saying that she wasn’t doing enough to control the “anarchists & agitators.”

In preparation for the handover, state troopers, the local sheriff and Portland police met and agreed not to use tear gas except in cases where there’s a danger of serious injury or death, Mayor Ted Wheeler said. Federal agents sent to the city in early July have used it nightly as protesters lob rocks, fireworks and other objects.

“The federal officers are using CS gas broadly, indiscriminately and nightly,” said Wheeler, using another term for the chemical irritant in tear gas. “And that is why it is escalating the behaviour we’re seeing on the streets rather than de-escalating it – and that’s why this must come to an end.”

Wheeler, who himself was gassed when he joined protesters outside the courthouse last week, added that tear gas “as a tactic really isn’t all that effective” because protesters have donned gas masks and often return to the action after recovering for a few minutes. The Democrat also apologised to peaceful demonstrators exposed to tear gas used by Portland police before federal officials arrived.

“It should never have happened. I take personal responsibility for it, and I’m sorry,” said Wheeler, who is also the police commissioner and earned the nickname “Tear Gas Teddy” during the earlier protests.

Police Chief Chuck Lovell said he believes the new collaboration between local law enforcement agencies will be seen “as a victory in many ways”.

“A lot of people came out to express their displeasure of folks from the federal government here and engaging in crowd control with members of our community,” Lovell said. “So I’m hoping that on many levels that people are happy in this development.”

Portland has seen nightly demonstrations since George Floyd died on May 25 after a white Minneapolis police officer pressed a knee into the Black man’s neck for nearly nine minutes.

Demonstrations have at times attracted up to 10,000 people for peaceful marches and rallies around the city. But some protesters have turned to violence that has been increasingly directed at the courthouse and other federal property.

The Trump administration sent federal agents to guard the courthouse earlier this month and quell the unrest, but the deployment had the opposite effect, reinvigorating protesters who found a new rallying point in opposing the federal presence.

Federal law enforcement officers close a street downtown as they move towards protesters during a demonstration against police violence and racial inequality in Portland, Oregon, US [Caitlin Ochs/Reuters]

The US government had arrested 94 people as of Wednesday, and 400 people have been arrested by Portland police.

An AP analysis of more than 200 arrest records shows that even those accused of breaking the law during the nightly rallies do not fit neatly into Trump’s depiction of protesters as “anarchists and agitators”.

The AP found that 95 percent of those arrested by police and federal agents were local. The vast majority have no criminal record in Oregon. Many appear to be college students and their average age was 28, court records show.