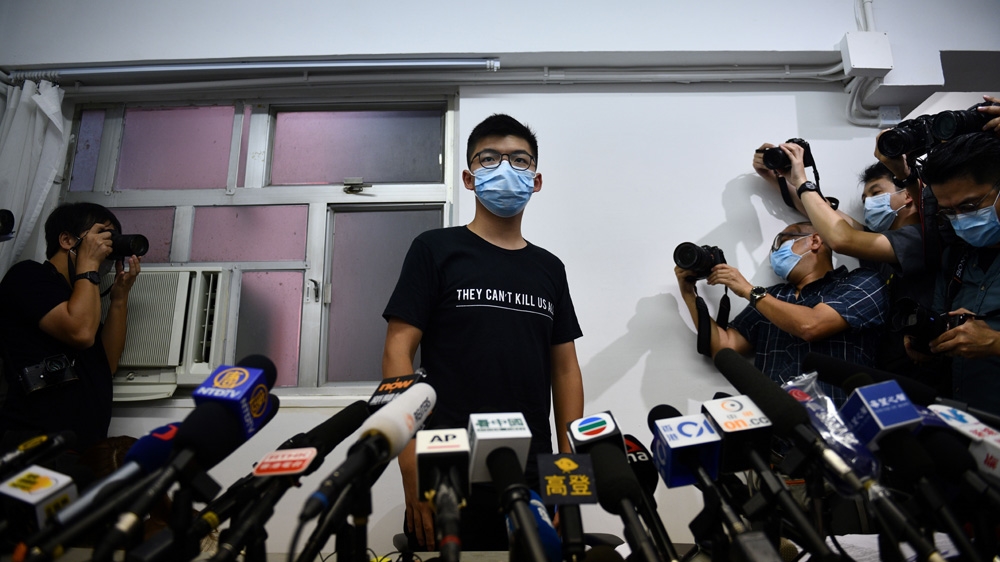 Joshua Wong, one of Hong Kong’s most prominent democracy campaigners, on Friday said the pro-democracy camp would continue their fight for freedom after officials disqualifed some pro-democracy candidates from running in September’s legislative elections and local media reported the poll could be postponed.

Elections for Hong Kong’s Legislative Council, known as Legco, are due to take place on September 6.

Only half the 70 seats are directly elected by Hong Kong people, with 30 chosen by special interest groups who are mostly pro-Beijing and the remaining five seats occupied by popularly-elected district councillors.

Hong Kong on Thursday disqualified a dozen candidates from the contest, including 23-year-old Wong.

Advocating for independence, soliciting intervention by foreign governments, or “expressing an objection in principle” to a national security law that China imposed on the territory earlier this month were behaviours that “could not genuinely” uphold the Basic Law, the government said in a statement.

Wong, who was dressed in a black T-shirt emblazoned with the words ‘You can’t kill us all’, told the media that Hong Kong’s new national security was a “legal weapon used against dissidents” and the disqualification of pro-democracy candidates the most “scandalous election fraud in Hong Kong history.”

“Our resistance will continue,” he added.

Doubts about whether the election will even go ahead have grown over the past week with multiple local media outlets reporting that the government will postpone the poll because of the jump in coronavirus cases.

Cable TV on Friday reported that the territory’s Chief Executive Carrie Lam would hold a press conference at 6pm (10:00 GMT) where she would announce the election would be postponed.

China imposed the new legislation, seeking to punish what it termed secession, subversion, terrorism and collusion with foreign forces. The law, which bypassed Hong Kong’s legislature, followed months of pro-democracy protests that began in June last year and at times descended into violence.

Supporters of the law say it will bring stability after a year of anti-China unrest. Critics describe it as an assault on Hong Kong’s autonomy and freedoms, which were promised under the “one country, two systems” framework agreed when the city was returned to Chinese rule by the British in 1997.

On Thursday, four students, the youngest just 16 years old, were arrested over social media posts that were deemed in breach of the law, the first to be made by a new dedicated police unit.