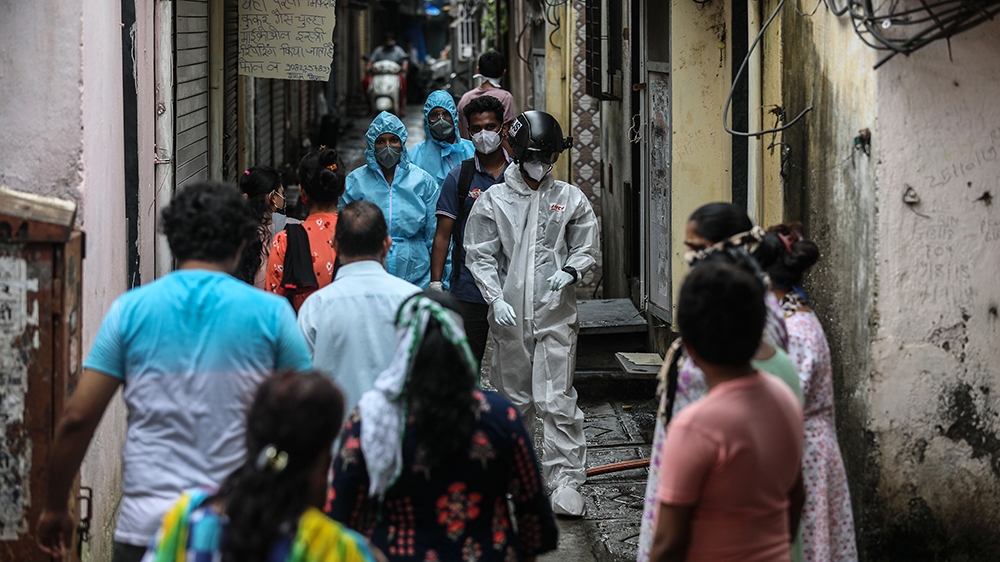 India’s coronavirus death toll has passed 35,000, overtaking that of Italy, as floods affecting millions and killing almost 350 hamper the battle against the pandemic.

With 779 deaths in 24 hours, the health ministry on Friday put the number of total fatalities at 35,743 – the world’s fifth-highest tally behind the United States, Brazil, the United Kingdom and Mexico, according to Johns Hopkins University.

Total infections in the world’s second-most populous country stand now at 1.63 million, surpassed only by the US and Brazil, both of which have much smaller populations.

But many experts have cast doubt on India’s official numbers, saying authorities are not testing enough people and many coronavirus-linked deaths are not properly recorded.

“Serological surveys that are being done around the country for antibodies are showing the real number of cases in India are much higher than the confirmed number,” said Al Jazeera’s Elizabeth Puranam, reporting from the capital, New Delhi.

Puranam said Mumbai – home to 20 million people and the capital of India’s worst-hit state, Maharashtra – serological surveys showed “nearly 60 percent of people have had the virus”.

Last week, a study indicated that almost a quarter of people in New Delhi have had the virus – nearly 40 times the official total.

Puranam also said authorities on Thursday tested more than 600,000 people, the country’s highest daily record yet, and are aiming to increase testing to about one million people a day.

Meanwhile, floods caused by annual monsoon rains in eastern and northeastern India that have displaced tens of thousands of people have been hampering efforts to stop the coronavirus spreading.

Floods have swamped large parts of the densely populated Bihar state and affected nearly four million people by Friday, stymieing the response to the pandemic.

The floods have killed at least 24 people in the state, where the downpours have submerged thousands of villages in 12 districts and further strained the already fragile healthcare system.

A partially submerged government building is seen in a flooded area in Bhagalpur district in the eastern state of Bihar, India [Stringer/Reuters]

More than 300,000 villagers have been evacuated to relief camps and officials warned of additional heavy rain in the next two days.

Bihar, one of the country’s poorest states whose primary healthcare system has long suffered from neglect, faces annual perennial flooding by the rivers originating from neighbouring Nepal that affects millions.

Doctors and experts, however, say the bigger worry this year is the rapidly spreading coronavirus – so far, the state has recorded 48,197 cases including 282 deaths.

That is a far lower death toll compared with other densely populated states that are witnessing a sharp rise in infections, but with experts warning of multiple peaks ahead, Bihar could be facing an uphill task to halt the virus spread.

“Unless the state government acts on the lines of Delhi government where hotels were turned into extended hospitals and emphasis was laid on testing, the situation would go beyond control,” said Sunil Kumar, a senior health expert in Bihar.

Kumar said the situation could turn critical because social distancing norms were hardly followed in the flooded districts.

“How can you expect flood-ravaged people taking shelter on highways and embankments to wear masks and maintain social distancing?” added Kumar, noting that the state did not have the human resources to deal with a pandemic.