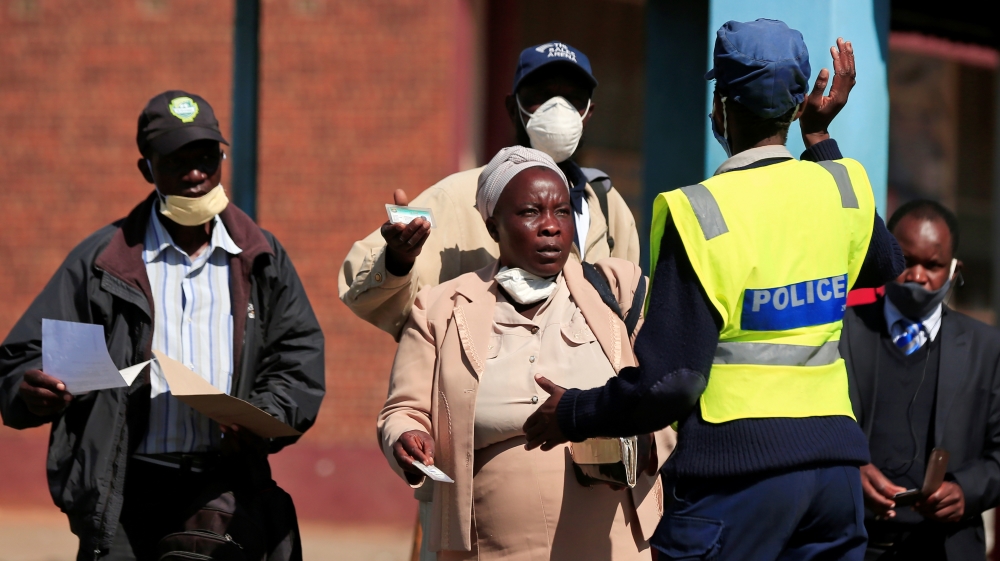 Security forces have vigorously enforced a lockdown in Harare, blocking people from entering the capital a day ahead of planned anti-government protests, while activists warned of mounting human rights abuses.

Police and soldiers manned checkpoints and ordered hundreds of people trying to enter the city to return home. In the city centre, security agents ordered people to leave and businesses to close.

A police statement said no demonstrations would be allowed.

“All security arms of government are on full alert and will deal decisively with any individuals or groups fomenting violence and sending threats or provocative messages through the social media or any other means,” it said.

Activists organising the protests on social media said they would press on and people would demonstrate in their neighbourhoods.

“The protest is fluid. It will take whatever form that will disable the regime, and would be the beginning of many more in future,” Promise Mkwananzi said by Twitter from a secret location where he was hiding from police.

“The regime has already been shaken to the core. We have disrupted their comfort zones.”

Tensions are rising in the southern African country as the economy implodes. Inflation is more than 700 percent, the second-highest rate in the world.

The World Food Programme on Thursday projected that the number of Zimbabweans facing food insecurity could reach 8.6 million people by the end of the year.

That would be “a staggering 60 percent of the population – owing to the combined effects of drought, economic recession and the pandemic,” said the WFP, appealing for more money to intervene.

Addressing senior ruling party officials on Wednesday, President Emmerson Mnangagwa described the planned protests as “an insurrection to overthrow our democratically elected government”. He warned that security agents “will be vigilant and on high alert”.

The opposition and human rights NGOs have said they are witnessing abuses such as arrests, detentions, beatings and stalking of activists and ordinary people accused of violating lockdown rules.

Police and government spokespeople have dismissed the allegations, even as a prominent journalist and a politician behind the protests have spent close to two weeks in detention.

A High Court judge on Thursday postponed the bail hearings of Hopewell Chin’ono, the journalist, and Jacob Ngarivhume, the politician. They are accused of planning the protests.

Mnangagwa’s administration accuses the US government of funding the two men and other activists involved in mobilising the protest, with a ruling party spokesman this week describing the US ambassador as “a thug”.