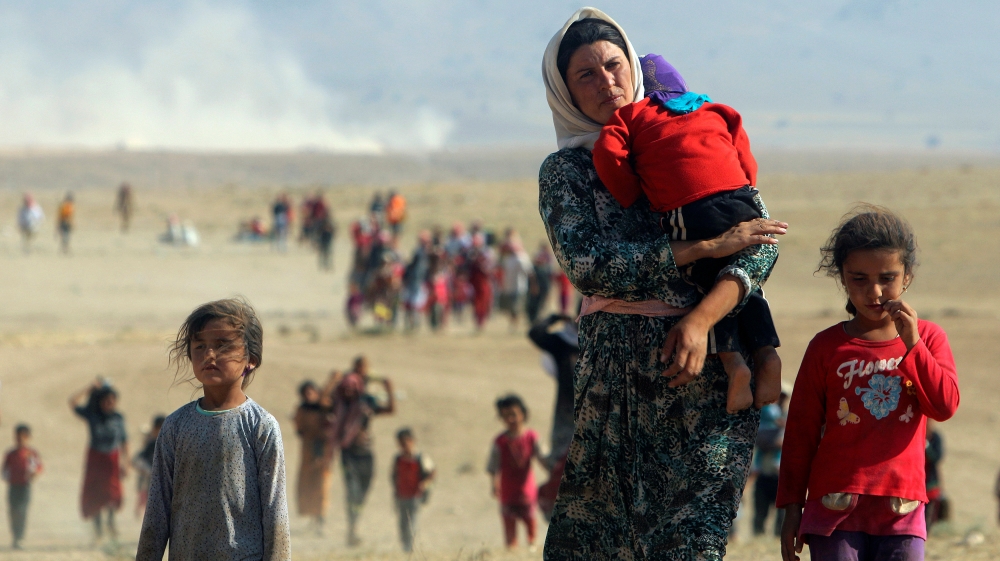 Nearly 2,000 Yazidi children who were subjected to horrendous human rights abuses at the hands of ISIL (ISIS) are not getting the help they need to deal with lasting physical and mental trauma, Amnesty International has warned.

In a 64-page report published on Thursday, the rights groups said the survivors currently living in Iraq’s Kurdish region have “effectively been abandoned” as they deal with severe debilitating long-term illnesses or physical impairments, as well as severe psychological problems.

While post-traumatic stress, anxiety and depression are all common, other symptoms and behaviours include aggression, flashbacks, nightmares and severe mood swings, said the report which detailed the challenges faced by an estimated 1,992 children who survived torture, forced conscription, rape and other abuses during their 2014-2017 captivity.

Young female survivors of sexual violence are particularly vulnerable as they suffer from a range of health issues, including infection, scarring, and difficulties conceiving or carrying a child to term.

In the report, a doctor is quoted as saying that almost every girl she had treated between the ages of nine and 17 had been the victim of rape or other forms of sexual violence.

“These children were systematically subjected to the horror of life under ISIS, and now they’ve been left to pick up the pieces,” said Matt Wells, deputy director of Amnesty’s crisis response team.

“While the nightmare of their past has receded, hardships remain for these children.”

The Yazidis are an ethno-religious minority numbering approximately 550,000 in their heartland of northwest Iraq before ISIL swept through the rugged region in 2014. Their belief combines elements of several ancient Middle Eastern religions.

ISIL, which considers the Yazidis heretics, slaughtered thousands of Yazidi men, abducted women and girls and forced boys to fight on its behalf during the time it controlled large swaths of Iraq and Syria.

Yazidi children were forcibly converted to Islam and taught Arabic, banned from speaking their native Kurdish.

Thousands of Yazidi boys were starved, tortured and forced to fight for ISIL. Many former child soldiers today live with missing arms or legs. They have also often been left isolated after their return, Amnesty said.

Sahir, a 15-year-old former ISIL child soldier, told the rights group he knew he needed mental health support to cope with his trauma but felt he had nowhere to turn.

“What I was looking for is just someone to care about me, some support, to tell me, ‘I am here for you’,” he said.

“This is what I have been looking for, and I have never found it.”

Amnesty said access to education could help ease children back into society, but tens of thousands of Yazidis still live in camps for displaced people where schooling is irregular.

Many have also gone into debt from paying thousands of US dollars to smugglers to free Yazidi relatives who were held by ISIL.

The report also documents the plight of Yazidi women struggling to heal their psychological wounds after being forcibly wed to ISIL fighters and separated from their children born of rape.

Mothers interviewed by Amnesty said they were “pressured, coerced or even deceived” into leaving their children when they returned to their families.

“I want to tell [our community] and everyone in the world, please accept us, and accept our children … I didn’t want to have a baby from these people. I was forced to have a son,” said 22-year-old Janan.

“We have all thought about killing ourselves, or tried to do it,” said Hanan, a 24-year-old Yazidi whose daughter was taken from her.

Mothers must be reunited with their children, and no further separation should take place, Amnesty said.

“These women were enslaved, tortured and subjected to sexual violence. They should not suffer any further punishment,” said Wells.

‘Not like other years’: Coronavirus dampens Eid al-Adha in Libya | News