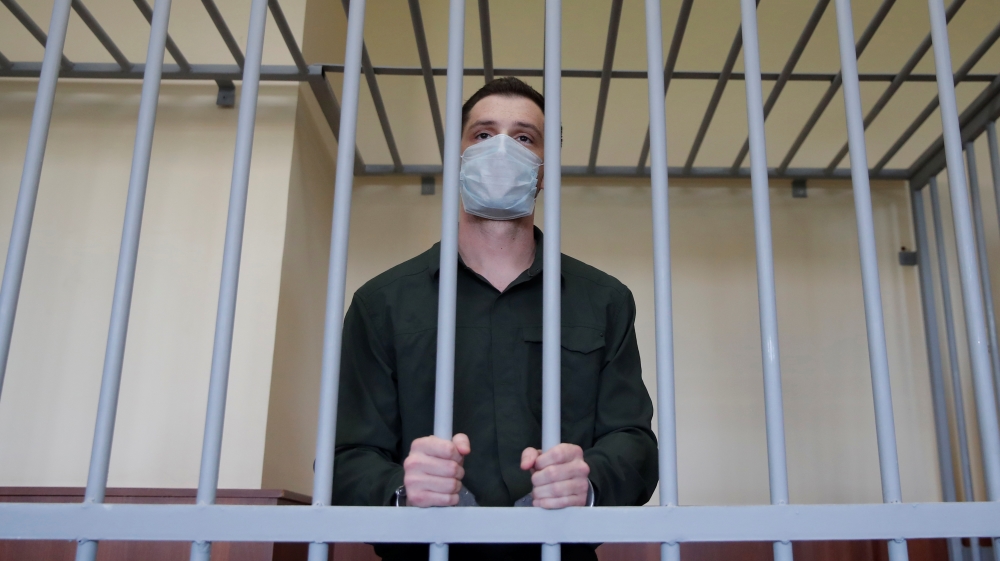 A Russian court has sentenced former US marine Trevor Reed to nine years in a penal colony for assaulting two police officers while drunk last year.

Reed, a 29-year-old student from Texas, allegedly attacked police after attending a party in Moscow.

He appeared, wearing a face mask, in a cage for defendants in a courtroom in the Russian capital as the judge read out the guilty verdict, saying the police officers had suffered “mental and physical harm”.

“This is completely a political case,” Reed told journalists after the verdict. “I will be asking my government for political support.”

The case has caught the attention of US diplomats in Russia, and US Ambassador John Sullivan said he was following proceedings along with the trials of other US citizens arrested in Russia.

Reed has been held in a Moscow prison in pre-trial detention since August 2019. He pleaded not guilty to the charge, saying he remembers nothing of the incident.

His family has raised the alarm over what they say are irregularities in the proceedings and said the prosecution’s request for a nearly 10-year sentence was unfair.

Reed’s father Joey told reporters after the verdict was read out that he was planning to appeal directly to Russian President Vladimir Putin over the trial which he said was “completely corrupt”.

Reed’s case has attracted attention owing to the lengthy sentence faced by a US citizen and speculation in Russian and US media that Reed could become part of a prisoner swap.

Whelan’s brother David said in a statement on Wednesday: “Our family is not privy to government discussions, if there are any, about Paul’s case.”

Sullivan has also raised concerns over the case against Michael Calvey, a high-profile US investor who was arrested last year for allegedly defrauding a Russian bank.

Related Topics:EuropeLawRussiaUnited States
Up Next