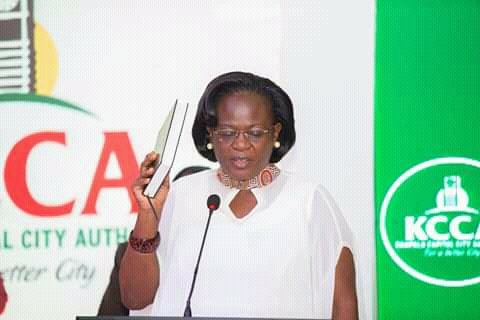 Dorothy took an oath as the new ED of KCCA on Thursday this week at KCCA headquarters in Kampala.

She replaced Andrew Kitaka who had worked as an Acting ED KCCA for two years following the resignation of Jenifer Musisi in December 2018.

In her congratulatory message, Nambooze said, “In our opinion, we think that your first assignment should be to depoliticize the KCCA technical wing. Further to recommend that you protect yourself and the entire KCCA staff against politically motivated actions of the Kampala Ministers,” she said.

Nambooze reminded Dorothy that as a civil servant, she is required to carry out only lawful orders and instructions.

“If you do this, you will never land into scandals and matters that book you a place at Luzira or make you profusely sweat before MPs sitting on the Public Accounts Committee (PAC),” she noted.

“We wish to remind you that the old KCCA law was amended to offer clarity on the position of the Lord Mayor, Division Mayors and Councilors as the political leaders of the City,” Nambooze added.

Nambooze also advised Kisaka to keep in mind that her role is to implement the resolutions of the Authority, “you are not and should not at all times appear like a political leader. Madam ED if you or any of the Officers under your leadership wish to exercise political power, this is the right time for that person to retire and go stand for elections.”

Reflecting on what she termed as persecution of the poor by the old KCCA leadership, Nambooze told Dorothy that the urban poor are not a nuisance and that they don’t have a calculated agenda to be agents of menace, whose mission is to cause inconvenience or annoyance but they are also Ugandans who have a right to earn an honest living and be accorded space in their Country’s Capital City.

“Another challenge you will deal with is corruption, abuse of office, and outright theft of public funds and resources. We pray that you don’t leave KCCA unceremoniously like predecessors, for you deserve better,” she concluded.