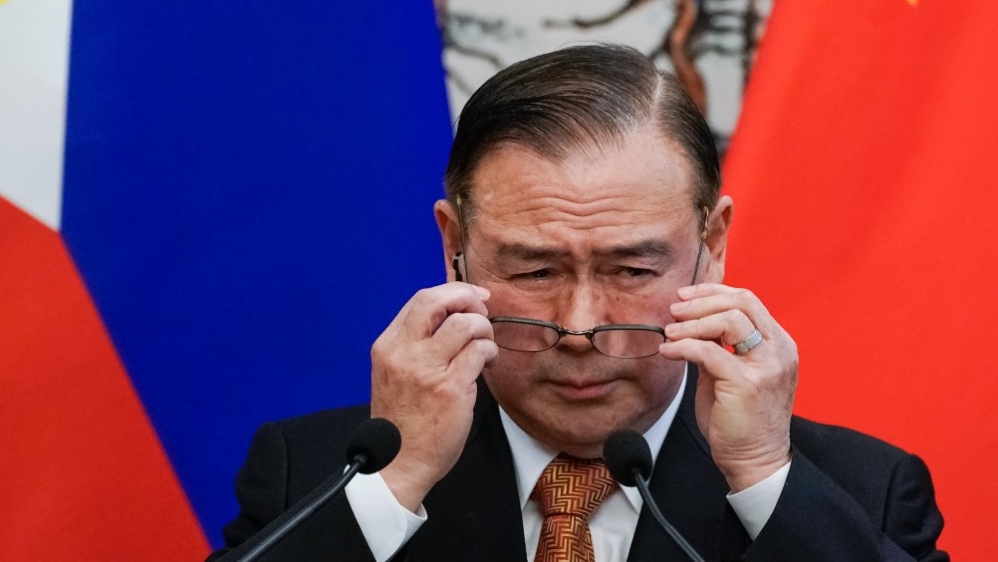 Malaysian Foreign Minister Hishammuddin Hussein says he is summoning Manila’s ambassador over a social media post from Philippine Foreign Affairs Secretary Teodoro Locsin Jr claiming that the Borneo state of Sabah is not a part of Malaysia.

Sabah joined the neighbouring state of Sarawak, and the states of the Malay peninsula to form the Federation of Malaysia in 1963. But the territory was once part of the centuries-old sultanate of Sulu, and Filipino politicians have sometimes used that history to suggest Sabah should be part of the modern-day Philippines.

Hishammuddin announced the summons late on Wednesday, after Locsin replied to a tweet from the US embassy by claiming that Sabah was not a part of Malaysia.

Hishammuddin said Locsin’s statement was “irresponsible”, but the top Philippine diplomat responded in a combative fashion, announcing on social media on Thursday that he would summon Malaysia’s representative to Manila.

In a barrage of social media posts, Locsin stepped up his attack against Malaysia, writing that “no country can tell another what it can and cannot say about what the latter regards as rightfully its own … That holds for Sabah.”

“I am summoning the Malaysian ambassador” to the Department of Foreign Affairs, he added in another post, in response to former Philippine Senator JV Ejercito’s Twitter post that Sabah “historically belongs rightfully to the Philippines”.

Locsin also reposted Ejercito’s statement saying, “They also are allegedly secretly supporting the terrorists in the South. I suspect that a lot of funding and arms of these bandits coursed through Malaysia.”

This is an irresponsible statement that affects bilateral ties. @MalaysiaMFA will summon the Philippines Ambassador on Monday to explain. Sabah is, and will always be, part of Malaysia. https://t.co/KcUnDxOySl

The dispute began on Monday night when the US embassy in Manila posted a statement on social media stating that it had distributed hygiene kits to Filipinos who had returned “from Sabah, Malaysia”.

In response to the post, sharp-tongued Locsin wrote: “Sabah is not in Malaysia if you want to have anything to do with the Philippines.”

Malaysia’s Hishammuddin reposted on Wednesday night Locsin’s remark, with his own comment saying, “This is an irresponsible statement that affects bilateral ties.”

He then announced that his office would summon the Philippine ambassador for an explanation.

“Sabah is, and will always be, part of Malaysia,” Hishammuddin wrote. The Ministry of Foreign Affairs declined to comment further on Thursday morning.

In his Twitter tirade, Locsin also claimed that Malaysia “tried to derail” the Philippines’s case against China in The Hague over the South China Sea. In 2016, the court dismissed China’s claims.

“None may share our [The] Hague victory who worked against it,” he added, blaming the US embassy in Manila for starting the controversy.

Without directly mentioning Malaysia, he also wrote that the Philippine military “does not forget who bankrolled the Muslim secession with arms and cash and bled us dry”.

The Philippines previously blamed groups from Malaysia of supporting secessionist movements among minority Muslim groups in the southern island of Mindanao.

But the Malaysian government had acted as a mediator between the Philippines and Muslim rebels, and was instrumental in the peace agreement between Manila and the Moro Islamic Liberation Front.

Rebel groups from the Philippines have sometimes kidnapped people from Sabah for ransom, while a group of armed fighters staged an incursion into eastern Sabah in 2013, leading to a weeks-long standoff with the Malaysian police near the town of Lahad Datu and death of 71 people. After the incident, Malaysia stepped up maritime patrols in the area, and instituted a new security zone.

Locsin, who served as the Philippine ambassador to the United Nations before becoming the country’s top diplomat, is no stranger to the controversy, as he routinely tussles with commenters on social media, calling them “idiots” and “stupid”.

In early 2019, he defended his comments on Nazi Germany and Adolf Hitler’s massacre of Jews as “historical fact”, increasing diplomatic tension between Manila and Berlin.

Locsin also wrote that President Rodrigo Duterte’s comparison of the deadly war on drugs in the Philippines to the Nazi leader’s killing of millions of Jews during the Holocaust was “a metaphor”.

Man Gets 11 Years in Prison for Killing Rafiki the Gorilla