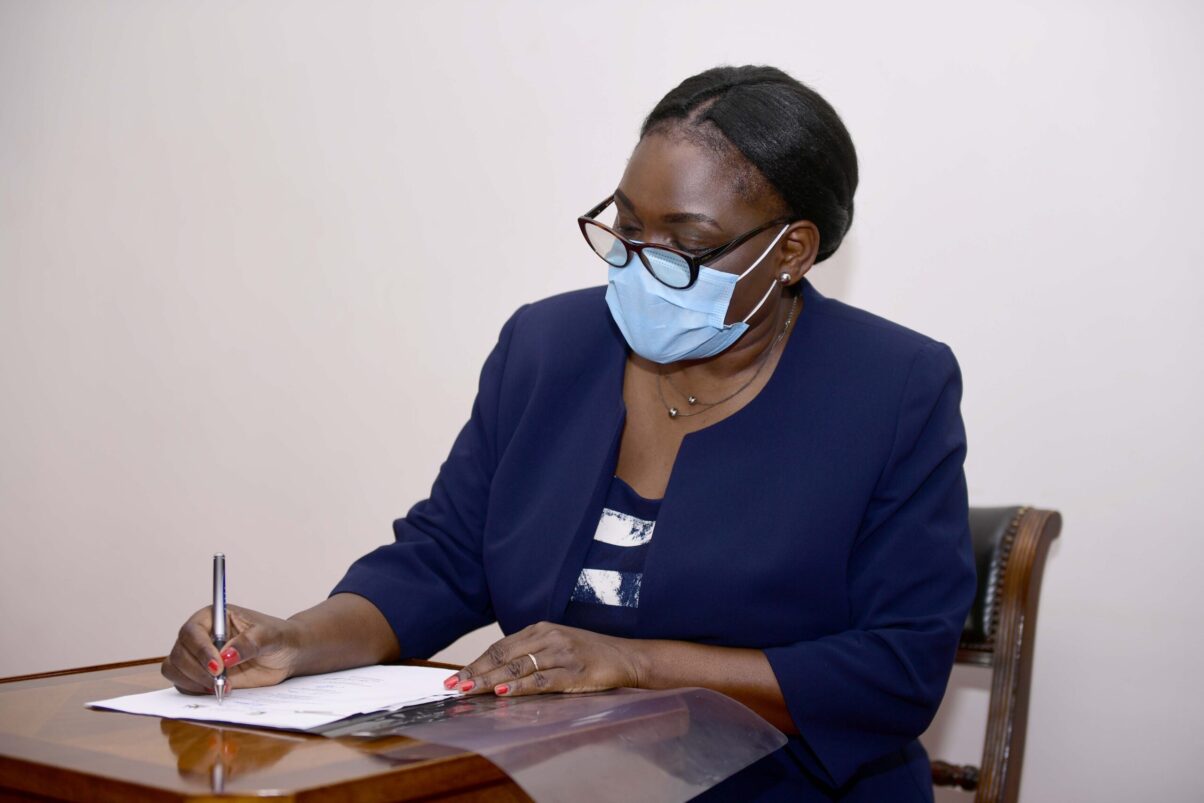 The Commission of Inquiry into Land Matters led by Justice Catherine Bamugemereire has handed over its report to President Yoweri Museveni and briefed him about several issues.

The land commission, among other issues tabled before the President, argued that the land fund established by the government to settle land matters is used to finance irregular transactions involving payment of huge sums of money from the land fund to brokers and well-connected individuals in Kampala.

“The Uganda Land Commission was found to have evolved a deep-seated culture as a private ‘dealership’ in Government land, with no effective control over it,” Bamugemereire said to the President at a ceremony held at State House Entebbe.

Justice Bamugemereire said the commission has prescribed the remedial measures to address the problems afflicting the systems of land administration, management, acquisition, and registration and land dispute resolution in Uganda.

The 7-member commission was appointed by the President on December 8, 2016, to inquire into the effectiveness of law, policies, and processes of land acquisition, land administration, land management, and land registration in Uganda.

According to Justice Catherine Bamugemereire, the commission received complaints totaling to 8528 from 123 districts out of 135 between 2017 and 2019 which constitutes 91% of the total districts.

Speaking shortly after receiving the report, President Yoweri Kaguta Museveni who congratulated the commission upon their completion of the report, said that it is going to be a good nucleus for the current understanding of land use for wealth creation.

“At the core of these problems, is the lack of vision of answering the question of ‘where does wealth come from. The desperate rush for land, they think that wealth only comes from Agriculture,” President Museveni said.

Apart from commercial Agriculture, the President said the rest do not need a lot of land for one to create wealth for themselves.

“The other forms of wealth creation sectors like services, industries and ICT do not need a lot of land. We need land for infrastructure development and for conservation,” he said.

President Museveni said the report will be given to the Minister of Lands, Housing and Urban development who will present it to the cabinet for discussion and government will write a white paper to address the whole issue.

The Commission among other things wants government to addresses the challenge of the perceived subservient position of customary land by ensuring that all land including customary land is registered.

“All land in the country should be put on a register after an adjudication process,” Bamugemereire said.

The Commission also recommends the establishment of an institutional framework for the administration of customary land within the Uganda Land Services Bureau framework.

The Land dispute situation, according to Bamugemereire was found by the commission to be a pandemic, in which mostly the well-to-do persons have obtained land through illegal means, bribing their way through all systems of land administration and registration.

The Commission recommended among other issues, the enactment of a distinct wetland law to reverse the tempo at which wetlands are reclaimed in Uganda and to restore degraded wetlands, amend the law to curtail the excessive powers of the chief government valuer and the commissioner for land registration.

“The land and environment court which shall have circuits in all of the regions shall entertain appeals from district tribunal as well as have original jurisdiction in the environmental matter and land acquisition compensations,” Bamugemereire said.

On the contestation over land as a result of the discovery of mineral rights, the commission recommends that a strong regulatory framework should be established to check the pervasive syndicated corruption and prevent the dishing of mineral rights at the expense of reputable companies.

Justice Catherine Bamugemereire said that as a commission, they are confident that because President Museveni holds a special place in the history of Uganda’s transformation and as a guarantor of the peace and prosperity of the people of Uganda, the recommendations of the commission can only be realized with his foresighted leadership and strategic guidance.