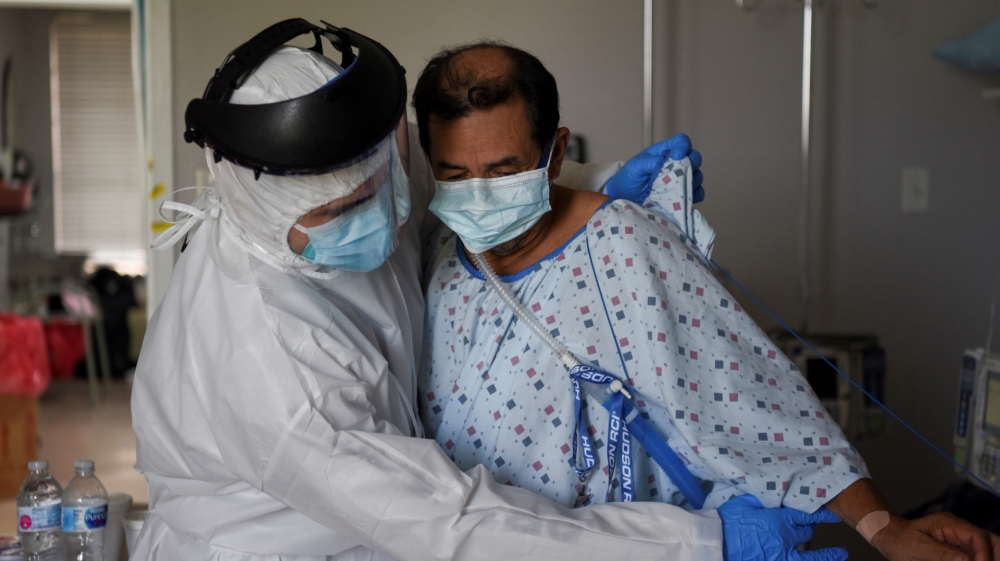 Scientists in the United States have urged the government to reset its approach to the coronavirus pandemic, warning that the world’s hardest-hit country was “not on course to get control” of an outbreak that has so far killed 150,000 people and infected 4.4 million.

Wednesday’s call from researchers at Johns Hopkins University came as the US reported its highest single-day jump in COVID-19 deaths since May, with the states of California, Texas and Florida all setting one-day records for fatalities.

The scientists’ policy brief said that while the US had managed to bring down cases in May by implementing stringent stay-at-home orders, the current spike in infections was overwhelming hospitals in many parts of the country and “stressing many sectors of society, from business to education to healthcare”.

Hospitalisation rates for COVID-19 in most states now match or exceed numbers seen in New York City, the previous epicentre of the outbreak in the country during the peak months of March and April.

“Unlike many countries in the world, the United States is not currently on course to get control of this epidemic. It’s time to reset,” the brief said, outlining 10 actions required to stem the virus’s spread.

Chief among them was a recommendation for the universal use of masks, physical distancing, hand hygiene and avoidance of large gatherings.

“Without having these measures in place, it will be difficult to maintain control of outbreaks or turn the corner on an outbreak that is accelerating,” the brief said.

“COVID-19 has reached a point in the United States where these protective actions should no longer be called a matter of individual choice, but measures of societal responsibility.”

In areas where the outbreak is worsening, officials must reinstate stay-at-home orders until numbers improve for at least two weeks, the brief said. Such a decision will be disruptive, it acknowledged, and therefore leaders must prioritise clear and transparent communications to convey to the public the motivations and anticipated timelines for the closures.

Other recommendations included bolstering supplies of personal protective gear and diagnostic testing kits at healthcare facilities. The scientists also called for better analyses of epidemiological data and scaling up contact tracing across the country.

“The coronavirus pandemic is the most serious epidemic threat to the United States in a century,” the brief said.

“The United States has reached a critical point in the outbreak trajectory, and serious consideration needs to be given to ways in which the response can be improved. The time is now to move forward to reduce transmission and save lives.”

The brief echoes the advice of many health experts who say the US outbreak could be brought under greater control if guidelines to maintain physical distancing and wear masks in public were enforced nationwide.

But President Donald Trump has rejected a federal mask order, and while he was initially reluctant to be seen wearing one, he has recently come round to the idea.

The president is also pushing states to fully reopen schools when the academic year begins in the autumn, but teacher unions and local officials have called for students to stay home and for classes to move online.

“We have seen some signs in recent weeks that the increase in virus cases and the renewed measures to control it are starting to weigh on economic activity,” the chairman of the Federal Reserve, Jerome Powell, said on Wednesday.

Thailand’s military under scrutiny over treatment of conscripts | Thailand News