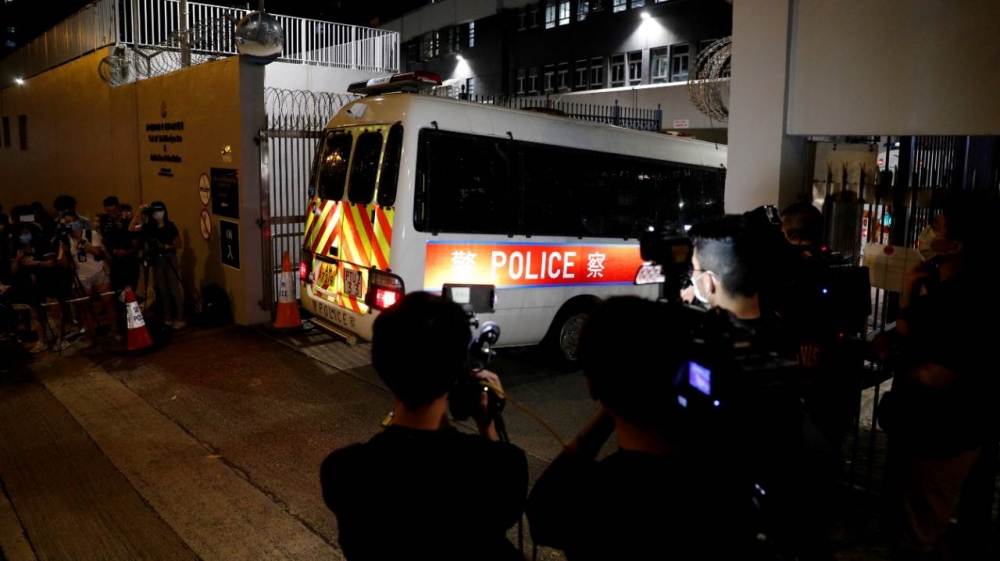 Hong Kong police have arrested four people, the youngest just 16,  for suspected offences under the city’s new national security law, the first such detentions outside of street protests since the legislation took effect a month ago.

In a press conference shortly before midnight on Wednesday, a police spokesman said the three men and a woman, all students, were suspected of being involved in an online group that pledged to use every means to fight for an independent Hong Kong.

“We arrested for … subversions and for the organising and also the inciting [of] secession,” said Li Kwai-wah, police superintendent at the Hong Kong National Security Department.

Student Localism, a group that used to advocate independence, said in a statement that its former leader Tony Chung, 19, was among those arrested.

Breaking: #Beijing staged its first major round of arrests under #Nationalsecuritylaw tonight. Former convenor of the disbanded @studentlocalism, Tony Chung, and another two former members, were arrested by #SecretPolice”. Tony’s been tailed for days. pic.twitter.com/xi6jaX0T1J

One other former member who was arrested was identified by local politicians and media as Yanni Ho. Two others were not identified. The eldest person detained is 21 years old.

China considers Hong Kong to be an “inalienable” part of the country, so calls for independence are anathema to its Communist Party leaders.

Beijing imposed the national security law in the semi-autonomous city territory on the eve of July 1, when it traditionally marks the 1997 handover from Britain. Under the so-called “One Country, Two Systems” framework, China is supposed to guarantee freedoms and Hong Kong’s way of life for at least 50 years.

Beijing says the national security law is needed to end unrest and restore stability – and claims it will not affect people’s political freedoms.

“The gross misuse of this draconian law makes clear that the aim is to silence dissent, not protect national security,” said Sophie Richardson, China director at Human Rights Watch.

The legislation outlaws what Beijing loosely defines as secession, subversion, terrorism and collusion with foreign forces with up to life in prison.

It has been condemned by some Western governments, business leaders and human rights groups who say it is an attempt by Beijing to tighten its grip over China’s freest city. In response, they have suspended extradition treaties with Hong Kong and loosened migration rules for Hong Kong residents.

Beijing says the law is crucial to plug gaping holes in national security defences exposed by months of sometimes violent anti-government protests that began in June 2019.

Authorities in Beijing and Hong Kong say the law will be used to target only a minority of “troublemakers”.