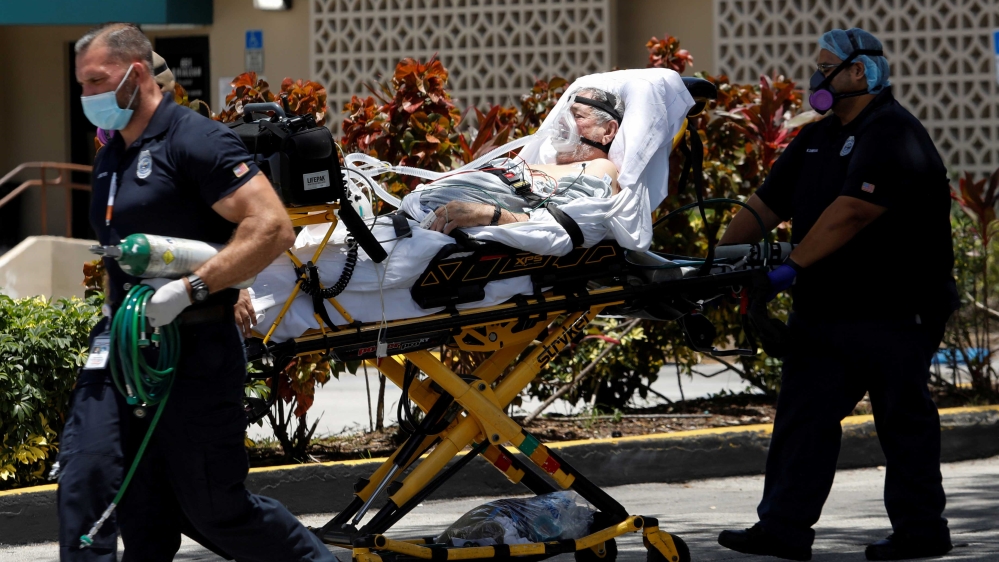 Coronavirus infections appear to be picking up in the United States’s Midwest as Americans travel around the country for the summer, while the surge in the South shows signs of abating, the coordinator of the White House Coronavirus Task Force said on Thursday.

The coronavirus outbreak is “moving up” into Kentucky, Tennessee, Ohio, Missouri, Kansas and Nebraska from the south “because of vacations and other reasons of travel,” Deborah Birx told Fox News.

Florida reported a record increase in new COVID-19 deaths for a third day in a row on Thursday, with 252 fatalities in the last 24 hours, according to the state health department.

Florida also reported 9,446 new cases, bringing its total infections to more than 450,000, the second highest in the country behind California. Florida’s total death toll rose to 6,333, the eighth highest in the nation, according to Johns Hopkins University.

More than 50 hospitals in Florida have run out of intensive care unit (ICU) beds as the state struggles under the pressure of the pandemic, the Agency for Health Care Administration (AHCA) said on Wednesday.

Miami-Dade and Broward, the two most populous counties, reported being at capacity in their ICUs.

AHCA data shows only 1,000 open ICU beds are available across Florida, just over 16 percent of the state’s total number of ICU beds.

Miami Beach, Florida has imposed a curfew in the wake of rising coronavirus cases and deaths [Liza Feria/Reuters]

Florida was one of the first states to begin reopening its economy amid the pandemic and now it finds itself the new epicentre of the virus.

Due to the spike in cases, the Miami area school district, the nation’s fourth-largest district, said students would not return to classrooms when the new academic year begins in a few weeks.

Florida was among six states on Wednesday that reported single-day records for coronavirus deaths. California, Idaho, North Carolina, Texas and South Dakota also had their biggest one-day spikes in coronavirus fatalities since the pandemic started. California, Florida and Texas are the three most populous states and where about a quarter of all US residents live.

One person in the US died about every minute from COVID-19 on Wednesday as the national death toll surpassed 150,000, the highest in the world. Deaths are rising at the fastest rate since early June.

Nationally, COVID-19 deaths have risen for three weeks in a row while the number of new cases week-over-week recently fell for the first time since June.