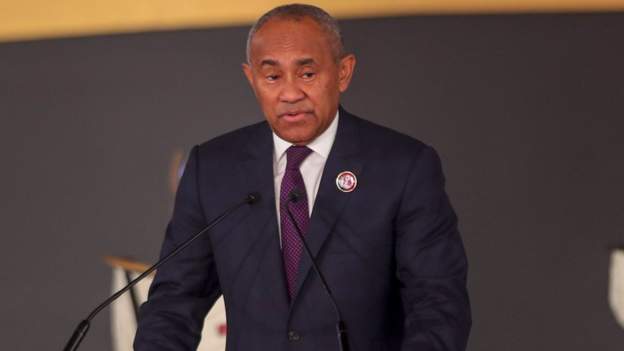 Confederation of African Football (Caf) president Ahmad says he is undecided about running for a second term in office next year.

Ahmad, the subject of an ongoing Fifa Ethics case, indicated that he is likely to decide late on and only after seeking guidance from colleagues.

“I still take advice from all the participating parties of African football,” the Fifa vice-president told BBC Sport Africa. “Once it’s done, I’ll be able to say whether or not I go for it.”

The former Madagascar FA head announced his 2017 candidacy four months before the elections, and just a week before their deadline, saying he decided to run after hearing some federation presidents call for change.

“I do not do this function out of personal ambition,” Ahmad ventured. “I do it far more out of collective motivation and currently, even if I think about it a little bit, I do not want to think about it too much.

“I’d rather put my energy into the obligations that Caf has to face these days, that are very urgent. Many things need to happen.”

Since coronavirus spread across the world, Caf – like many sporting organisations – has been facing a logistical nightmare working out when it can stage forcibly-postponed tournaments, such as the next Africa Cup of Nations.

It is also in arbitration with Lagardere Sports, whose billion-dollar TV and marketing deal was cancelled by Caf last October – a decision Ahmad blames on anti-competition regulations, but one which could cost his organisation tens of millions of dollars in compensation to the French company.

While he mulls his future, some have seen this month’s decision by Caf to increase the yearly subventions for its members from $200,000 to $300,000 as a possible first step along the election campaign.

But the 60-year-old states the money is to help federations as they battle financial losses brought about by the coronavirus pandemic.

“We are making an effort to stabilise our finances at Caf but at the same time substantially help the federations,” he said.

“We have decided to give $300,000 to each of them, which implies an enormous engagement on the part of Caf for $16.2m, but it’s an obligation. We must invest to be able to hope to increase future revenues.”

Ahmad is the subject of a Fifa ethics investigation after his former Secretary General Amr Fahmy made various allegations to football’s world governing body against the Malagasy – all of which he denies.

French anti-corruption authorities have also been interested by one of the allegations, which centres on a controversial deal with Tactical Steel, a little-known French gym manufacturer run by an old friend of Ahmad’s then attaché, which provided sportswear equipment to Caf in 2017 after an original deal with Puma – slightly smaller, but costing four times less – was cancelled.

Fifa has not released information about the ethics investigation but has sent auditors to Caf, with Pricewaterhouse Coopers – in a damning report that leaked in February – questioning missing funds amounting to over $20m while also calling for further investigation into Ahmad’s role in the Tactical Steel affair.

The Zurich body undertook the audit along with Caf while undertaking an unprecedented move in the history of world football.

Between August 2019 and February 2020, the global body sent its own Secretary General, Fatma Samoura, to act as a ‘General Delegate for Africa’ in a bid to improve football governance on the continent.

Many saw this as an admission that Caf under Ahmad was clearly failing. The Malagasy sees it differently and insists it was he who asked for assistance.

“I might be the only president of a confederation with a real experience of managing public affairs,” said the former vice-president of Madagascar’s Senate.

“I was in a government, in a Senate, and perhaps it is those experiences that pushed me to always look up towards the bigger organisation and collaborate with it.”

The joint Fifa-Caf relationship, which lasted six months before being abruptly curtailed in February, ended with Fifa listing 100 points that required reform, including relieving Caf’s Executive Committee of its management responsibilities and introducing a Code of Ethics.

The African body has itself created a so-called ‘Transform Caf‘ programme, which Ahmad says will achieve similar objectives.

“When we analysed Fifa’s document, we went to 120 points more or less – and today, Caf is open,” he asserts. “We only need to validate certain points that need the approval of Congress.

“In December, important decisions will be taken. Not all will be taken though, because some changes relate to the president and in December we’ll be on the eve of presidential elections.

“So we won’t seal these changes to ensure it is not interpreted as a way of closing the door to other candidates. On that point, the new president will be able to decide if he or she wants to amend the statutory clauses.”

Ahmad did not elaborate any further but all should be revealed in Ethiopia at the General Assembly in December, by which time candidates for the election will have been determined.

Should he contest March’s elections, Ahmad is likely to face more challengers than three years ago, with a strong challenge from North Africa anticipated.