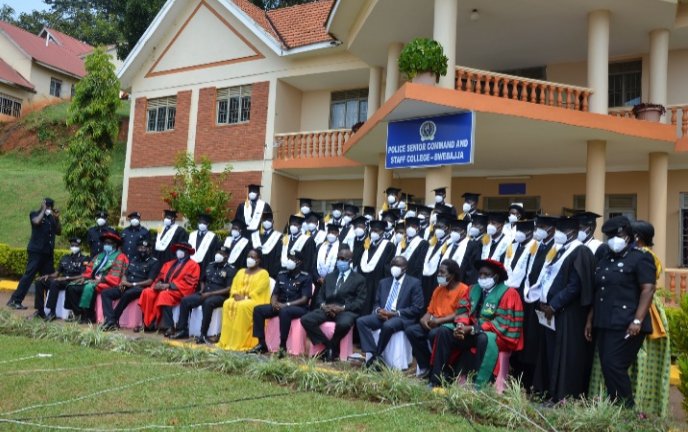 A total of 76 Senior Police Officers have today graduated from Police Senior Command and Staff College, Bwebajja, after completing a one year course in command and human rights.

Mr. Okoth Ochola congratulated the officers for completing the course and for being disciplined while at the college.

He said that Police as an institution is committed to protecting life and property as per the mandate.

Maj.Gen. Sabiiti appreciated the President of Uganda, Gen. Yoweri Museveni for the great support he rendered to Police as an institution. He said that Police have got better technology to fight crime like CCTV cameras and crime data management systems.

He said that with CCTV, Police can now have a bird’s eye view in terms of policing an area.

Ohola also urged the officers to adapt to the changing environment in Policing which is challenging.

SSP Caroline Akoth who spoke on behalf of other graduates said the course has helped them acquire new skills in planning, briefing personnel before deployment, agenda-setting, and prioritizing national security components.

“It has enhanced us with critical analysis of situations, enhanced teamwork. We are now very strong and ready to take on tasks,” SSP Akoth said.

Bwebajja College Commandant, Dr. John Kamya, said the 2017 cohort had 39 senior police officers but one was dismissed after his papers were found unfit for a Master’s course. The 2019 intake had 38 senior police officers and have all acquired skills in crime analysis, intelligence and human rights observance.

“You are leaving this place with certificates in development, command and research competencies. They must be attributes of police commanders. You’ve also acquired knowledge in crime management, intelligence and service writing,” Dr. Kamya said.

Dr. Kamya added that the skills the officers have attained must also enable them to comprehensively investigate sexual offences.

Director of Police Human Resource Development, AIGP Godfrey Golooba, urged graduates to exhibit the skills they have acquired to steer the police institutions.

Related Topics:newsug police
Up Next

In Pictures: Hajj in the shadow of coronavirus | Saudi Arabia