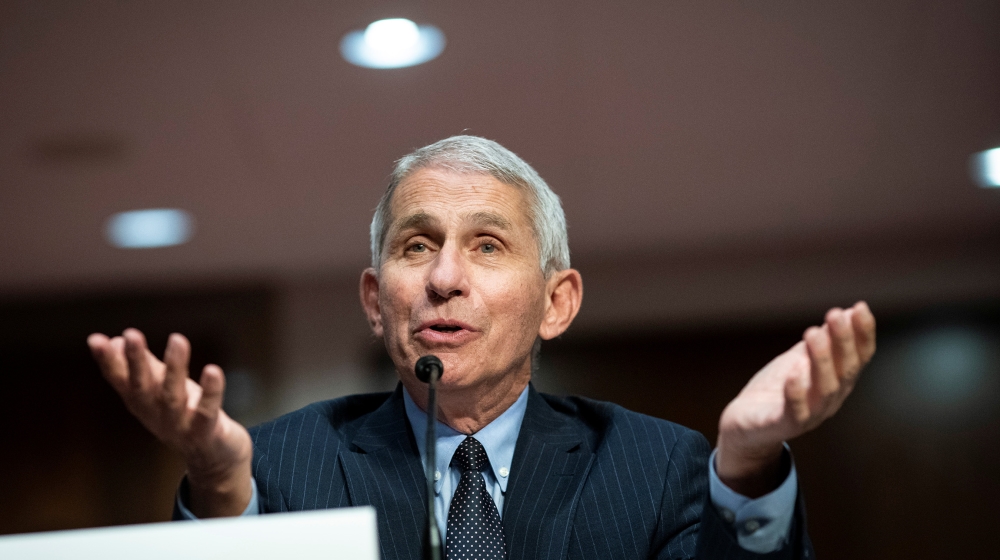 A week after appearing to project a more serious tone about the coronavirus, President Donald Trump is back to pushing unproven claims that an anti-malaria drug is an effective treatment and challenging the credibility of the nation’s leading infectious disease expert.

Dr Anthony Fauci pushed back Tuesday, saying he will keep doing his job.

Numerous studies, meanwhile, have shown that the drug, hydroxychloroquine, is not an effective treatment for COVID-19, the disease caused by the coronavirus. And the US Food and Drug Administration recently withdrew an order that allowed the drug’s use as a emergency treatment for COVID-19.

Yet overnight, after returning from a trip to North Carolina in which he promoted efforts to develop a COVID-19 vaccine, Trump retweeted a series of tweets advocating for hydroxychloroquine.

Dr Anthony Fauci and US President Donald Trump used to meet regularly earlier in the pandemic, Fauci has not been seen with the US president in months [File: Carlos Barria/Reuters]

The president also shared a post from the Twitter account for a podcast hosted by Steve Bannon, a former top White House adviser to Trump, accusing Fauci of misleading the public about hydroxychloroquine.

Fauci, a leading member of the White House coronavirus task force, pushed back Tuesday during an appearance on US broadcaster ABC’s Good Morning America.

“I’ll go along with the FDA,” said Fauci, the longtime director of the National Institute for Allergy and Infectious Diseases. “The overwhelming prevailing clinical trials that have looked at the efficacy of hydroxychloroquine have indicated that it is not effective in coronavirus disease.”

It is not the first time Fauci has come under attack from Trump and those close to him.

The president’s top trade adviser, Peter Navarro, who has clashed with Fauci about hydroxychloroquine, recently penned a scathing attack on the doctor that was published by USA Today. The newspaper later said the opinion piece did not meet its standards.

In recent nationally televised interviews, Trump himself has described Fauci as “a bit of an alarmist” and accused him of making “mistakes” in his coronavirus guidance to the American people.

At a news conference late on Tuesday, Trump groused about the attention being lavished on Fauci. Trump said he and others in his administration deserved plaudits for their handling of the virus, not just Fauci and another prominent member of the task force, Deborah Birx.

“So it sort of is curious, a man works for us, and yet they’re highly thought of and nobody likes me. It can only be my personality,” he said.

Asked if he can continue to do his job when Trump continues to publicly question his credibility, Fauci said Tuesday he would press ahead “no matter what” because of the stakes involved.

“I don’t tweet. I don’t even read them, so I don’t really want to go there,” Fauci said.

Twitter Inc. on Tuesday said it had limited access to Donald Trump Jr’s account for 12 hours, after he posted a video of doctors talking about hydroxychloroquine that violated the site’s misinformation policy on COVID-19.