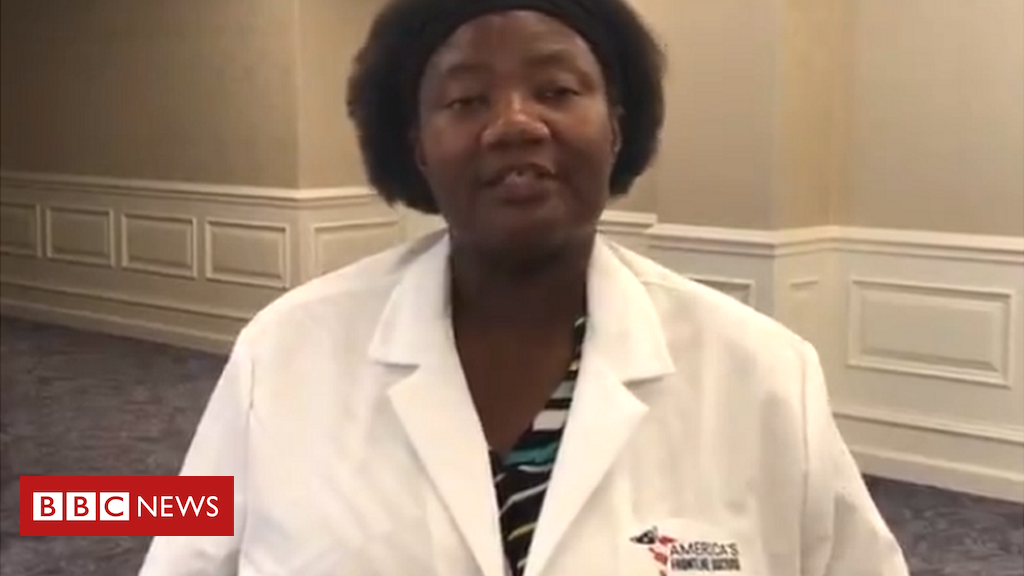 Stella Immanuel, a doctor at the centre of a controversy over unproven and potentially dangerous claims that an anti-malaria drug can treat Covid-19, is no stranger to conspiracy theories.

Facebook and Twitter have taken down the viral video in which she appears, saying it violates their policies about misinformation – but not before it was retweeted by Donald Trump and one of his sons.

The US president defended himself, saying he found Dr Immanuel, who was born in Cameroon and is based in the Texan city of Houston, “very impressive”.

“She said that she had tremendous success with hundreds of different patients, I thought her voice was an important voice but I know nothing about her,” he said on Tuesday.

Dr Immanuel, who is also a Christian pastor, gave a speech on the steps of the US Supreme Court in Washington, captured in a video first published by right-wing website Breitbart on Monday.

Along with other medics from a group called America’s Frontline Doctors, she said that Americans were being denied a potential cure for Covid-19.

“Nobody needs to get sick. This virus has a cure – it is called hydroxychloroquine, I have treated over 350 patients and not had one death,” said Dr Immanuel.

Despite some early studies raising hopes that the drug could be used to cure coronavirus, one subsequent larger scale trial has shown it is not effective as a treatment.

The World Health Organization (WHO) has halted its trials, saying it doesn’t reduce death rates in patients with coronavirus.

Last month, the US Food and Drug Administration (FDA) cautioned against using the drug to treat coronavirus patients, following reports of “serious heart rhythm problems” and other health issues.

And Dr Anthony Fauci, a leading member of the White House coronavirus task force, has reiterated these views.

“We know that every single good study – and by good study I mean randomised control study in which the data are firm and believable – has shown that hydroxychloroquine is not effective in the treatment of Covid-19,” he told the BBC on Wednesday.

But Dr Immanuel has insisted taking hydroxychloroquine is not harmful because it is widely taken in her home country of Cameroon, where malaria is endemic.

Born in 1965, Dr Immanuel graduated with a medical degree from the University of Calabar in neighbouring Nigeria – and has a valid doctor’s licence, according to the website of the Texas Medical Board.

She is also a pastor and the founder of Fire Power Ministries in Houston, a platform she has used to promote other conspiracies about the medical profession.

Five years ago, she alleged that alien DNA was being used in medical treatments, and that scientists were cooking up a vaccine to prevent people from being religious.

Some of her other claims include blaming medical conditions on witches and demons – a common enough belief among some evangelical Christians – though she says they have sex with people in a dream world.

Another issue that Dr Immanuel targets is gay marriage, saying it can result in adults marrying children, according to the Daily Beast.

She also offers a prayer to remove a generational curse, originally received from an ancestor, but transmitted through placenta, the news website’s profile of her says.

In her latest video posted on Twitter on Tuesday, she asks patients she says she has cured of Covid-19 to come forward.

“If you don’t speak up we are getting trashed,” she says, encouraging them to use a hashtag when they post their video messages.

After Facebook took down the America’s Frontline Doctors’ video on Tuesday, she declared that Jesus Christ would destroy the social media giant’s servers if her videos were not restored to the platform.

Facebook has not reported an interruption on its services.

Who are the America Frontline Doctors?

It is a collection of physicians critical of the scientific consensus around the Covid-19 pandemic. The event on Monday was backed by the Tea Party Patriots, a conservative organisation seeking to re-elect President Trump.

The doctors believe neither masks nor shutdowns are necessary to fight the spread of coronavirus.

The group’s founder, Simone Gold, organised a letter to Mr Trump calling for an end to lockdown measures in May.

Participants were encouraged to seek out interviews with social media influencers, as this was determined to be the best way to reach Americans.

Ralph Norman, a Republican member of the House of Representatives, was standing alongside the doctors when they delivered their news conference.

The debate has been increasingly dividing Americans along political lines, with proponents of hydroxychloroquine pointing to President Trump’s support of it while accusing critics of covering up its potential effectiveness.

US: Pentagon announces 11,900 troops to be moved from Germany | News