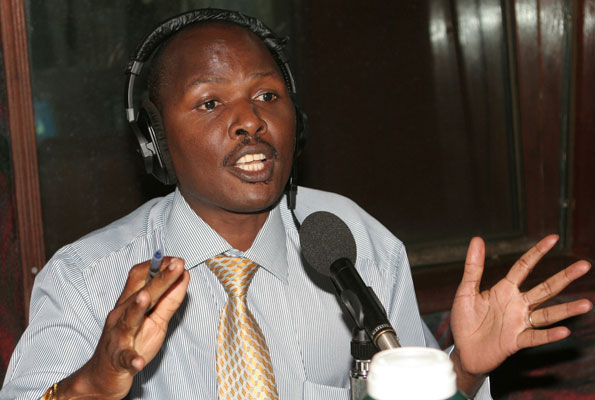 Presidential hopeful also the former head of Political Intelligence Desk at the Internal Security Organization (ISO), Charles Rwomushana, who was arrested by Police last night has been charged with disobedience of Presidential directives.

Rwomushana was arrested outside NBS Television offices in Kamwokya where he had gone to participate in a weekly talk show known as Barometer with other politicians.

Appearing before City Hall grade one Magistrate Valerian Tuhimbise, Rwomushana denied the charges against him.

Through his lawyers, he applied to be released on bail pending the hearing of this matter whose investigations are still at an infant stage.

The magistrate cautioned the sureties who included George Byamukama and Daniel Mugarura on ensuring his return to court wherever he is required to do so.

Having found the two sureties substantial, the court released him on a cash bail of 200,000 shillings well as each surety was ordered to sign a non-cash bond of 500,000 shillings.

Rwomushana will appear in court on August 10, 2020, for the mentioning of his case.

The prosecution alleges that on July 28, 2020, around 1 am in Kamwokya, Kampala district, Rwomushana disobeyed the Presidential directives on COVID19 when he was found driving a vehicle past 9 pm – curfew time.

Rwomushana was charged alongside people Power supporters James Mubiru and Opondo Gaster who were also arrested over the same offense but they were also released on 200,000 cash bail each.

We Used Reasonable Force: Police Speaks Out on Clashes at FDC Headquarters

The Minister for Internal Affairs General Jeje Odongo has dismissed claims that Government is currently not at the best of terms with Non-Governmental Organizations and embarked on policies aimed at suppressing them.

Speaking at the launch of a book titled ‘Uganda’s Civil Society’ in Kampala, Odongo noted that while some things might not have moved on well between Government and some NGOs, the former is willing to address these issues so that the two parties can continue operating hand in hand.

“I would like to assure you that Government in the process of regulating this field through the NGO bureau. Government doesn’t have any sinister motives but is focused on improving the sector.”

As the line minister, Odongo vowed to ensure that the relationship between Government and these Organizations is improved to the extent that where there is a need, government will be ready to come in and support them.

The new book, which contains crucial information about these bodies, Odongo said, will be of great importance to various stake holders.

Stephen Okello the head of the NGO Bureau applauded the author and financer of this publication, saying it had come at a time when the country lacks a one stop center as far as operations of NGOs in the country is concerned.

“This book is very important because it’s going to spark off discussions on issues affecting CSOs; therefore, I ask everyone to spare time and read it.”

Joel Senyonyi the spokesperson for National Unity Platform (NUP) asked Government to stop referring to its critiques as enemies of the state or Agents of Europeans because they do all this as a result of love for their nation.

Sarah Bireete the Executive Director for Center for Constitutional Governance (CCG) noted that the Government is more comfortable with them sensitizing people on Sanitation matters than issue of Governance issues.

The post Gov’t Promises to Mend Relationship with NGOs first appeared on ChimpReports.


Against the backdrop of the BLM movement protesting racial injustice, calls increased for change to IOC rule.

Taking a knee during the Tokyo Olympics or lifting a fist in support of racial equality will be punished as the International Olympic Committee (IOC) maintained its ban on athletes’ protests inside stadiums, at ceremonies and on podiums.

The IOC’s Rule 50 forbids any kind of “demonstration or political, religious or racial propaganda” in venues and any other Olympic area and the Games body concluded the rule should be maintained following an athlete consultation.

Against the backdrop of the Black Lives Matter (BLM) movement against racial injustice, calls have increased in recent months for a change to that rule that would allow athletes to protest.

Some international federation chiefs, including World Athletics’ President Sebastian Coe, have said athletes should have the right to make gestures of political protest during the Games.

The IOC’s Athletes’ Commission chief Kirsty Coventry, who led a review of the rule, said 70 percent of the athletes consulted were against any protests within the fields of play or the podiums.

“I would not want something to distract from my competition and take away from that. That is how I still feel today,” Coventry, a former Olympic swimming champion for Zimbabwe, said in an online presentation of the Rule 50 consultation results.

Coventry said there were a series of recommendations approved by the IOC’s Executive Board on Wednesday, including providing clarity on sanctions, more information about Rule 50, a change of wording of the Olympic Oath with messages on inclusion, and producing athlete apparel with inclusive messaging.

The IOC’s recommendations are the result of a consultation process that started in June 2020 and involved more than 3,500 athletes.

The Tokyo Olympics, delayed by a year due to the coronavirus pandemic, kicks off on July 23.

The headteacher of Yole primary school in Tergo district, northern Uganda has been arrested on allegations of defiling and battering his own daughter.

Tom Amayo was arrested on Tuesday by officers from Katrini police post following a tip-off by the victim’s uncles where she had sought refuge.

According to preliminary police findings, the suspect committed the offence several times at his residence in the staff quarters where has been living with the victim. Agnes Anyu, the Terego district police commander, says that they have charged the suspect rape, defilement and torture.

Geoffrey Aziz, a member of Yole primary school management committee told URN that they are in the process of holding an emergency meeting following the arrest of the headteacher to forge away forward to allow the school to run normally.