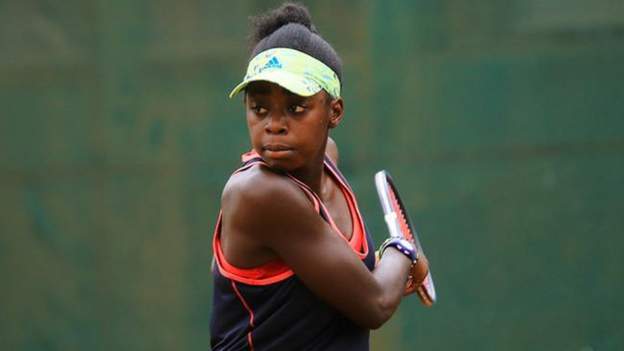 Teenage Kenyan tennis star Angella Okutoyi has said that delaying the 2022 Youth Olympics for four years is set to hit her career.

The lengthy postponement means the 16-year-old will miss out on a once-in-a-lifetime chance, because she will be too old to compete in 2026.

The Youth Olympic Games happens every 4 years and targets boys and girls aged between 14 to 18 years old.

The Senegalese capital Dakar was due to host the Youth Olympics in 2022 but the International Olympic Committee (IOC) now says they will not happen until 2026.

IOC president Thomas Bach explained earlier in July that the fourth edition of the Youth Games was postponed as a result of the “financial consequences” of the current “global health crisis”.

“It’s devastating that I will not (have the chance) participate in the 2022 Olympics because it has been postponed to 2026,” Okutoyi told BBC Sport Africa.

“It that was the only chance for me to participate in it and have the feeling and experience of how the main Olympics feels.

“The Youth Olympics Games are actually important because, if you are able to be part of it and participate in it why shouldn’t you be able to go on and play in the main (Olympics) and also make it part of becoming a professional?”

Her coach Francis Rogoi added that that depending on her ranking she could also have been entitled funds from the IOC’s Olympic Solidarity fund to help her prepare.

As well as her longer term plans the global Covid-19 pandemic has meant changing her aims for this year.

“My plans for 2020 was to play a couple of some International Tennis Federation (ITF) competitions to see where my ranking can go,” she explained.

“My goal was to push my ranking to be top 100 by the end of 2020 for me to see if I could play (in the juniors at) grand slams this year and if not possible next year January.”

She is Kenya’s top ranked junior and senior tennis player as well as number two in her age group in Africa according to the International Tennis Federation (ITF) .

Okutoyi has already won several high profile ITF junior competitions with several highlights in 2018, including winning the under-14 singles title at the African Junior Championships in Algeria.

Rogoi firmly believes that Okutoyi has a bright future ahead of her.

“She is a potential Grand slam player with her style of play, she will improve the short comings in her game,” he insisted.

“She is the next Serena. She simply scares the rest; she stands out she just needs to improve physiologically to be able to control flow of the matches to conquer.”

And Okutoyi is using the interruption to her playing schedule this year to work on the mental side of her career.

“I am able to sit down with the time I have, visualize, try to evaluate myself, and everything since most of the year I hadn’t gotten the chance of doing so,” she explained.

“Lessons that I have picked so far from my learning and evaluation is that I should be patient and there will also be obstacles on your way.”

“What I love about this sport is that it is an independent sport whereby you have to depend on yourself.”

She has already set her sights on other goals now that she will not be getting the to playing at the Youth Olympics.

On her radar now are the 18 and under title at the Africa Junior Championships, playing at a junior grand slam, winning the All Africa Games title and representing Kenya in the global women’s team event the Fed Cup.

“It is just a matter of time and obviously there will be more tournaments I will participate in and if I continue working hard I will finally be able to play in the main Olympics,” she said.

One on One with Kyokunda Esther, Uganda’s First Female Certified Flight Instructor

‘Don’t come back, they’ll kill you for being gay’