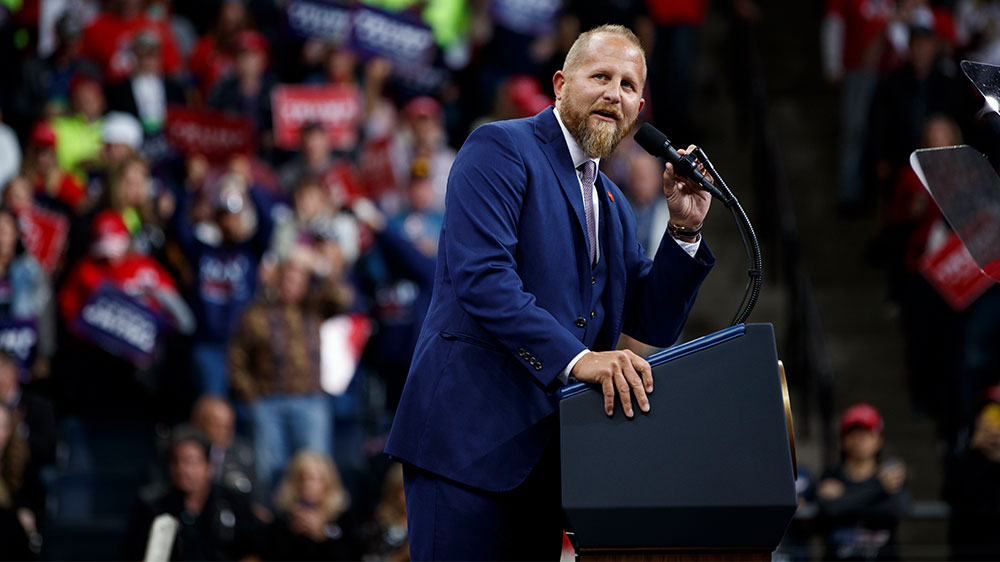 The use of firms linked to former campaign manager Brad Parscale masked the ultimate recipients of the money, which the Campaign Legal Center (CLC) described as a “laundering” effort that violates election law, according to a complaint the group filed with the Federal Election Commission.

Most of the payments by Trump’s campaign committees were made to American Made Media Consultants, which has received at least $177m since 2018, according to FEC records. The other firm, Parscale Strategy, has collected at least $32m during that period, the records show.

Details on our new complaint in this thread from CLC’s @brendan_fischer ⬇️ https://t.co/qSajUdSILX

The campaign said that American Made Media Consultants was formed to purchase advertising directly – and save money by not relying on middlemen. But records show the company instead acted as a clearinghouse for spending, while still using third-party vendors, which it was ostensibly created to avoid, the complaint states.

In at least two cases, outside firms owned by Trump’s digital director Gary Coby appeared to have been the firm tapped to make purchases or develop digital communication products, though there is no record of payments made to Coby in Trump’s campaign finance disclosures, according to the complaint.

Meanwhile, Parscale Strategy has been used to pay the salaries of some Trump re-election officials, including Lara Trump, the wife of Trump’s son Eric, and Kimberly Guilfoyle, the girlfriend of Trump’s eldest son, Don Jr, the complaint states.

Parscale, a political novice and ally of Trump son-in-law Jared Kushner, ran Trump’s digital advertising in 2016 and was credited with helping bring about his surprise victory that year with micro-targeted online advertising campaigns on social media platforms such as Facebook.

Have never tweeted before, didn’t plan to start…but Twitter is making me tweet something so they’ll delete the people creating fake accounts. Lots of folks out there without a date on a Friday night, apparently. #MAGA

Trump and Parscale’s relationship had been increasingly strained in the run-up to the change, with the president annoyed by the publicity Parscale had garnered in the role. But the final straw appeared to be a Tulsa, Oklahoma, rally last month that drew an unexpectedly low crowd of about 6,200 people after Parscale had bragged that more than a million people had requested tickets.

Parscale remains employed by the campaign as a senior adviser for digital strategy.

In a statement, Murtaugh did not address the salaries paid through Parscale Strategies. But he said that American Made Media Consultants is not paid a fee and does not earn a commission.

“It builds efficiencies and saves the campaign money by providing these in-house services that otherwise would be done by outside vendors,” Murtaugh said. “The campaign reports all payments to AMMC as required by the FEC.”

The media is a criminal network that has very few honest people. They have zero intention to tell the truth. I have seen so many live in fear of a negative story.

I am happy I get to continue to fight with @realDonaldTrump against America’s biggest enemy, the media!

Brendan Fischer, a lawyer with the CLC, said the campaign was improperly avoiding mandatory disclosure.

“This illegal conduit scheme leaves voters in the dark about the entities working for the Trump campaign, the nature of their services and the full amount they are paid,” Fischer said. “We don’t know all of what is being hidden by this scheme, but we do know that it violates the law.”

While the CLC bills itself as a non-partisan organisation and was founded by a Republican who once worked on late Senator John McCain’s 2000 and 2008 presidential campaigns, its work in recent years has tended to be on behalf of left-of-centre causes such as felons’ voting rights and voter suppression issues. Its leadership includes veterans of the left-wing Southern Poverty Law Center and the American Civil Liberties Union, and it received funding from ActBlue and the George Soros Open Society Foundations.

In any event, it is unlikely that the group’s complaint will be taken up by the FEC before the election. The federal agency can take years to address complaints and it often deadlocks along partisan lines.

Earlier this month, one longtime commissioner announced she was stepping down, denying the FEC enough members to legally meet to conduct business.