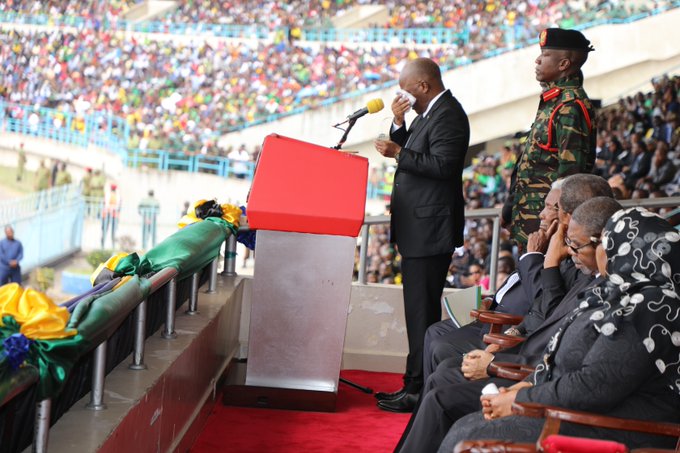 “Without Mzee Mkapa, I probably would not be here where I am,” said Magufuli as he wiped away his tears with a hankie.

“Suffice it to say Mkapa is my hero, even when I was in trouble or dealing with many challenges, Mzee Mkapa never left me. He did not want me to fall, he raised me as his child,” Magufuli mourned the deceased.

The president spoke Tuesday at the funeral of Mkapa at the national stadium in Dar es Salaam.

“But even Kikwete (Jakaya), I saw him crying. So don’t be surprised. And Kikwete is a Colonel but he shed tears.”

President Mkapa was a signatory to the Treaty for the Establishment of the East African Community on November 30, 1999 alongside the late President Daniel Toroitich Arap Moi (Kenya) and President Museveni.

The departed Head of State also signed the EAC Customs Union Protocol in Arusha alongside President Moi and President Museveni on March 2, 2004.

The Customs Union Protocol, which took effect on January 1, 2005 and became fully fledged on January 1, 2010 resulted in significant increases in the volumes of intra-regional trade in East Africa.

Mkapa was part of the African Union Panel of Eminent African Persons who mediated in the 2008 post-election dispute in Kenya that resulted in the formation of a Grand Coalition Government that brought peace and stability to the country.

Addressing thousands of mourners today, Magufuli said he “had the opportunity to speak to Mzee Mkapa by phone at the hospital, just hours before he died. I remember when I spoke to him he told me ‘John don’t worry I’m fine’, I didn’t know if those words were to say goodbye’”. said Magufuli.

The President also announced the change of Uhuru National Stadium’s name to ‘Benjamin Mkapa Stadium’ as one of the ways of paying tribute to the late Mkapa.

The president said he had seen a lot of comments from people wanting the stadium to be named after Mkapa and he agreed.

“Mzee Mkapa has passed away just eight months after launching his book, ‘My Life, My purpose’ on 12 November 2019, in which he has described in great detail the history of his life,” recalled Magufuli.

He also hailed Mkapa for entrenching the culture of democracy in Tanzania.

“Mzee Mkapa was first elected to lead our country in 1995 in the first multi-party elections. This means that Mzee Mkapa is the father of democracy in the country,” said Magufuli.

The East African Community (EAC) hailed Mkapa as a “dedicated Pan-Africanist who was committed to regional integration and South-South cooperation, in addition to mediating in armed conflicts and political disputes in various African countries, where he championed African solutions to African problems.”

Mkapa, who died at the age of 81, will be buried on July 29 in his native village of Lupaso in Masasi district in Mtwara region.