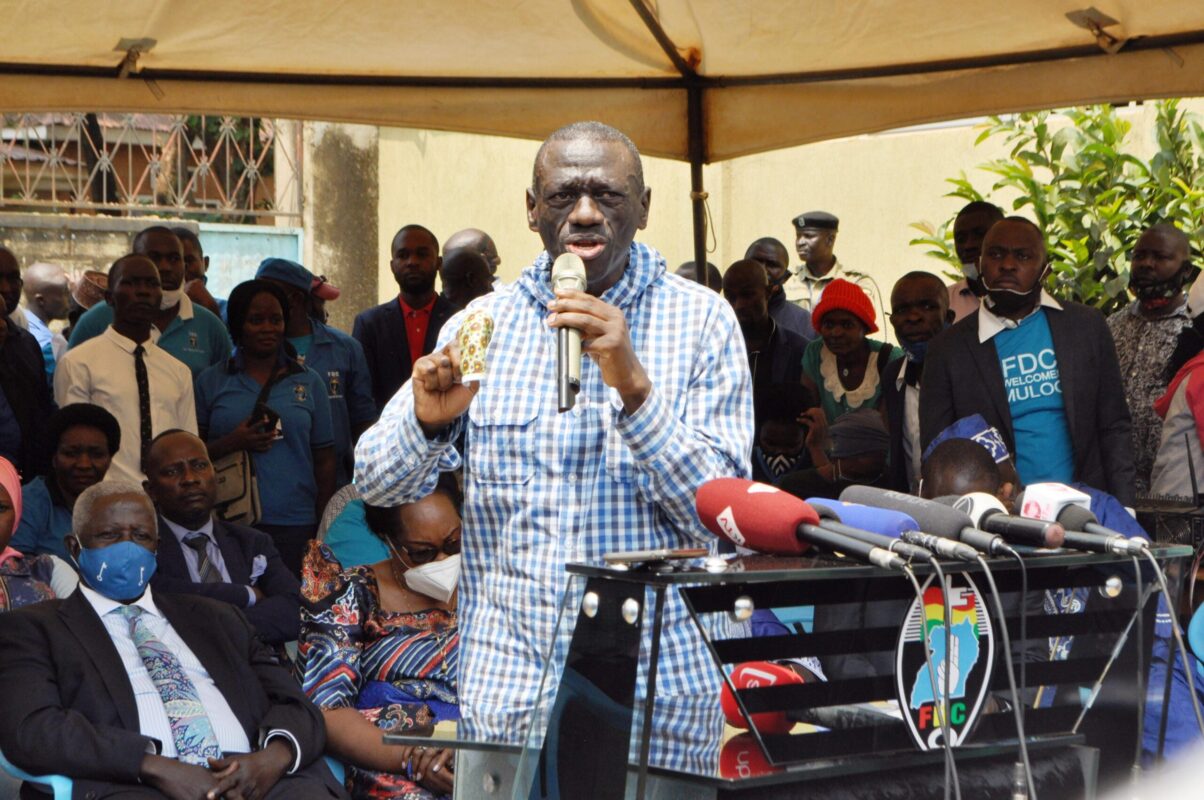 Dr. Kizza Besigye has urged change seeking Ugandans not to deliberate on the potential end date of President Yoweri Museveni’s 34-year regime but work towards that day in day out.

He made these remarks while speaking at Lord Mayor Erias Lukwago’s unveiling ceremony that was held at the Forum for Democratic Change (FDC) headquarters at Najjanankumbi.

Speaking on Tuesday, Besigye intimated that while liberation seems closer than ever, citizens must not expect it to fall from heaven like manna.

“That you are now looking at 2021. Why should you condition your mind according to their plans? Why can’t Ugandans turn Uganda into their country even tomorrow? Or even today, why must we wait? That we are waiting for 2021,” Besigye posed.

For one, Besigye pointed out that when they were capturing power as the National Resistance Army (NRA) in 1986, nobody told them when to swear in.

“On 26th January 1986; when Museveni was sworn in as President, who set up that day? Who set up the date for his swearing-in? It was ourselves sitting in Lubiri there, having captured it,” he stated further.

“We are the ones who said now tomorrow I think we should go and swear in. We set our own agenda. You cannot liberate your own country according to the agenda of another person,” Besigye added.

As such, he asked the Forum for Democratic Change (FDC) supporters to remain conscious of this fact and take heart.

That aside, Besigye called for tolerance towards those serving in the security forces saying that they are also suffering like other Ugandans.

“These soldiers are even annoyed than you are, they are suffering more than you are. And let us not at any moment think that these are our enemies. They are actually our friends still trapped,” he observed.

“Even those LDUs, they are your brothers and sisters, you know how much they are suffering,” Besigye stated further.

Bantariza said that while he only belongs to the National Resistance Movement (NRM), it is pretty clear that Lukwago departed a long time ago from DP.

“They have been pulling and pushing together. When Besigye put up his fake government of people’s government, he was appointed as vice or deputy president. How can they come now and say we have got a big fish from DP, they are lying,” he noted.

Rising further, Bantariza said that it is pretty clear that this defection was staged and managed to make FDC and Besigye relevant once again.

Therefore he called upon Ugandans not to be fooled by this gimmick and stick to his party which speaks the truth.

“My advice to Ugandans, they must be able to read between the politics of deceit and politics of truth. So that unveiling there is dishonesty that I read. I want to advise Ugandans that they should stick to the party that tells them the truth and that is NRM,” Bantariza summed up.

Has justice been done in the 1MDB scandal? | Najib Razak