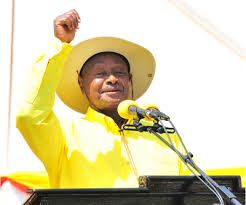 The NRM Electoral Commission chairperson, Dr.Tanga Odoi, also revealed that Museveni has also been nominated as the sole candidate for the National Chairperson for the ruling party as the deadline for picking nomination forms ended last week.

Museveni,75 also revealed that a manifesto is being worked detailing NRM plans for the next five years.

During the event, Museveni disclosed how he panicked and tested for COVID -19 on Sunday morning after waking up with a sore throat that led to the loss of his voice for hours.

Museveni whose voice was still hoarse during today’s occasion says he quickly sent for his Doctors who took his samples that returned that very evening negative.

He however attributes the hoarse voice to over 6 hours long meetings he attended where he had to talk for hours with a mask on.

“It appears that when you talk for long in the mask, it affects your voice,” Museveni explained.


Mpaka Records CEO Wycliffe Tugume alias Ykee Benda has expressed his irritation with people, most especially the male gender, who groove to his love songs but don’t get married.

The “Superman” hit singer slammed such people while performing on Bukedde TV on Saturday night.

We have composed and sang many love songs for you but guys you don’t want to get married. Now, why do we sing all these songs?

We sing for you so that you sweet-talk girls and marry them but instead you only stop at grooving to them. Please get married!

Ykee was however tipped by VJ Junior that his songs have acted as a great catalyst in promoting promiscuity among lovers.

Also the to many love songs have greatly contributed to the rapid increase of infidelity in relationships.


In their new photos, Mrs. Rema Namakula Ssebunya and her husband Mr. Hamza Ssebunya continue to show the depth of their bond and happiness in marriage as the latter shows off a new haircut.

Each time Rema Namakula takes long without sharing photos on her social media platforms, those within the entertainment circles start demanding for them.

Sunday evening had most of your demands fulfilled as the songstress, who is rumored pregnant, shared new photos with her husband.

The photos do not reveal much beyond Rema’s chest and several critics note that it is intentional not to show off her baby bump. They, however, show so much of Hamza’s face and the clean shave cannot be ignored.


It’s indeed ‘No Drama’ from the young talented rapper Zack Mukisa alias Zagazillions as he has once again dropped another new song with a mature touch.

Last year, the singer returned to reclaim his former glory and chose to re-brand from Yung Zee to Zagazillion as he released ‘Allowed.’

Zagazillion has dropped yet another single of 2020 dubbed “No Dramas”. As usual the rapper did justice to the love song as confessed how he doesn’t love drama in his love life.

The audio was produced by Nigeria’s Jay Pizzle whereas the video was directed by Director Pest of Grate Make Films.